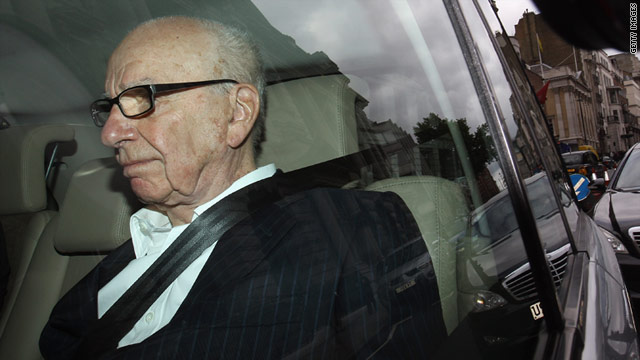 There are calls for Congress to look into allegations one of Rupert Murdoch's U.S.-based companies possibly broke the law.
STORY HIGHLIGHTS
RELATED TOPICS
RELATED TOPICS

Washington (CNN) -- The FBI has launched an investigation into Rupert Murdoch's News Corp. amid allegations that employees or associates may have hacked into phone conversations and voicemail of September 11 survivors, victims and their families, a federal law enforcement source told CNN.

"We are aware of the allegations and are looking into them," said the source, who requested anonymity due to the sensitivity of the investigation. "We'll be looking at anyone acting for or on behalf of News Corp., from the top down to janitors," to gather information and determine whether any laws may have been broken.

Because the investigation just began, it's too early to say when the first interviews will be conducted, the source said.

New York Rep. Peter T. King, a Republican, earlier this week asked FBI Director Robert Mueller to investigate the possibility that journalists working for Murdoch may have tapped into the phones of 9/11 victims and relatives.

Pressure mounted for a federal investigation into Murdoch's media empire as a key member of a House oversight committee called for Congress to look into allegations that one of his U.S.-based companies possibly broke anti-bribery and other laws.

"The department does not comment specifically on investigations, though anytime we see evidence of wrongdoing, we take appropriate action," said Justice Department spokesperson Laura Sweeney. "The department has received letters from several members of Congress regarding allegations related to News Corp. and we're reviewing those."

Gallery: Major players in the scandal

Inside the Murdoch scandal

Explain it to me: UK tabloid scandal

Rep. Bruce Braley, D-Iowa, told CNN that "Congress has important oversight responsibilities" in responding to the charges and "getting to the bottom of this evolving scandal."