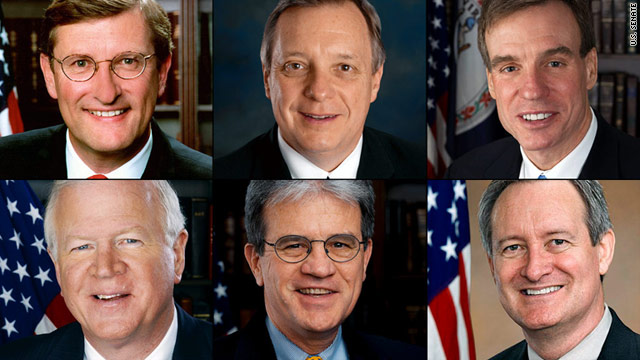 Washington (CNN) -- The burst of enthusiasm for the "Gang of Six" debt reduction plan as a way out of the debt ceiling crisis has appeared to fade as Democratic and Republican lawmakers studied and found fault with the details of the proposal.

Most notably, both sides highlighted well-worn party-line divisions: conservatives complained the plan would raise taxes while liberals warned it would cut entitlement benefits.

"It would be irresponsible for us to try to rush through such a complex package without time for meaningful review," said Sen. Jeff Sessions, the top Republican on the Budget Committee who said his staff has already identified "serious flaws" with the proposal.

Despite some strong pushback from liberal groups and labor unions to the proposed changes to entitlement programs, House Democratic Leader Nancy Pelosi seemed to leave the door open to the plan, telling reporters, "We haven't seen it but it has some good principles in it."

House GOP aides acknowledged some of the ideas for tax reform and spending cuts are similar to Republican-backed plans. But the aides privately cringed when President Barack Obama endorsed the proposal on Tuesday, because his very public embrace makes it even tougher to sell to House conservatives.

Ohio Republican Jim Jordan, leader of a large block of House conservatives, dismissed the proposal. He pointed to House passage of the "cut, cap, and balance" bill, which would make raising the debt ceiling contingent on congressional passage of a balanced budget amendment to the Constitution.

"Forget the 'Gang of Six,' let's go with the 'Gang of 234,' " Jordan said, referring to the winning number of votes for the measure. He said the "Gang of Six" plan was a nonstarter for him and for the members of the Republican Study Committee.

With growing signs that the monthslong work would not provide the key to avoiding default, Democratic and Republican leadership aides in the Senate sought to turn attention back to a last-ditch plan developed by Senate Republican Leader Mitch McConnell and Senate Democratic Leader Harry Reid.

That plan, which is still not finalized, would allow the president to seek an increase in the $14.3 trillion debt limit without the approval of Congress, set up a special committee to recommend ways to reduce the debt and possibly include a trillion dollars or more in immediate spending cuts.

However, as the August 2 deadline approaches, even that backup proposal appeared in trouble as Republicans continued to say it would not get the votes needed to pass the GOP-controlled House.

While House leaders met to consider next steps in the debt impasse, Republican freshmen continued to insist they were in no mood to compromise. South Carolina Republican Trey Gowdy said he and others want to pass something that's "transformative," not something that kicks the can down the road to another committee to study how to reduce the debt.

Asked about the McConnell-Reid plan's prospects in the House, Gowdy told reporters bluntly, "If there a state or condition worse than death, that's what it is. I can't think of one, so we'll just go with death for now."

Some senators said they would like to tie elements of the "Gang of Six" proposal to the McConnell-Reid measure as a way to salvage the group's work and to keep open the possibility of deeper reductions in the debt.

Conrad said one idea is to allow a vote on the gang's work if the special committee set up under the McConnell-Reid bill fails to reach agreement on ways to reduce the debt.

"What I would like to see is that this plan gets a vote," Conrad said.

Maryland Democratic Sen. Ben Cardin said it makes sense to tie the McConnell-Reid plan with elements from the "Gang of Six" proposal.

"That seems to be the most likely formula for a successful completion," Cardin said.

Rep. Steve LaTourette, a moderate Republican from Ohio, said he was encouraged by the "Gang of Six" proposal but has concerns about how parts of it would work.

Joking with reporters, he said both Senate compromises aren't exactly being embraced by House Republicans.

"The McConnell plan is less popular than the "Gang of Six" plan, but both of them come in at about the approval rating of the United States Congress," he said.