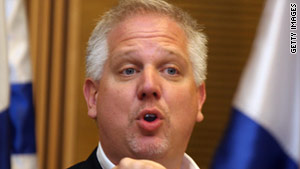 "Who does a camp for kids that's all about politics?" Glenn Beck asked Monday on his radio show.
STORY HIGHLIGHTS
RELATED TOPICS

(CNN) -- In the wake of last week's massacre in Norway, U.S. conservative commentator Glenn Beck on Monday compared the summer camp where most of the 76 victims died to the Hitler Youth organization of Nazi Germany.

Beck, on his radio show, declared the killings "the work of a madman" and called the suspect "as bad as Osama bin Laden." But before launching into that condemnation, he questioned what the victims were doing at a summer camp run by Norway's ruling Labour Party.

Beck said the camp "sounds a little like, you know, the Hitler Youth or whatever. Who does a camp for kids that's all about politics? Disturbing."

However, politically-oriented camps are being organized in several U.S. states by chapters of the "9/12 Project" -- an organization founded by Beck himself in 2009.

The Colorado 9/12 Project hosted a "Patriot Camp" for kids in grades 1-5 earlier this month, featuring programs on "our Constitution, the Founding Fathers, and the values and principles that are the cornerstones of our nation."

The suspect in Friday's Norwegian massacre is a right-wing Norwegian who police say wanted to halt what he believed as the Islamic "colonization" of the country. But while condemning the attacks, Beck said he predicted last fall that Europe "is going to go into problems with radical Islam" and cited Dutch far-right politician Geert Wilders as saying "Political correctness and multiculturalism is killing Europe, and he's right."

Attempts to contact Beck's representatives were unsuccessful Monday night. Beck recently left his hour-long show on Fox News Channel, but his radio program is still heard on 400-plus stations and he recently launched a web television venture, GBTV.