Obama: 'I need a dance partner' on immigration reform 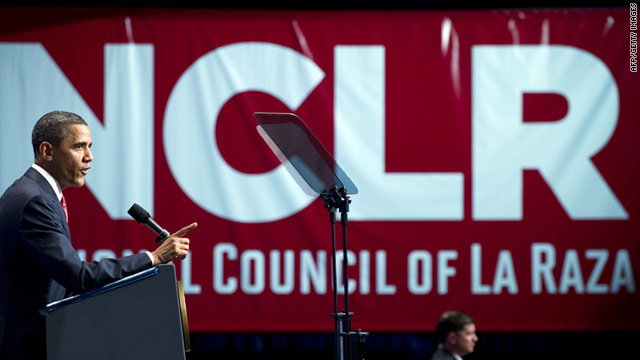 (CNN) -- America's immigration system is broken, but only a bipartisan political movement can fix it, President Barack Obama said Monday.

"The idea of doing things on my own is very tempting, I promise you, not just on immigration reform. But that's not how our system works. That's not how our democracy functions," Obama told the National Council of La Raza.

Speaking at the organization's annual conference in Washington, Obama said passing immigration reform measures will require support from both sides of the aisle in Congress.

"Let's be honest, I need a dance partner here, and the floor is empty," he said.

Audience members greeted Obama with a standing ovation, and responded to his discussion of immigration reform by chanting, "Yes you can, yes you can."

"I need you to keep building a movement for change outside of Washington, one they can't stop, one that's greater than this community," Obama told them.

The speech comes at a critical time for Obama, who is trying to drum up support among Latino voters in the run-up to the 2012 election.

"Feel free to keep the heat on me and the heat on Democrats. But here's the thing you should know, the Democrats and your president are with you, don't get confused about that," he said Monday.

Its leader Monday praised Obama's efforts to help Latinos and lauded much of the president's work from the White House, particularly his appointment of Hilda Solis as labor secretary and Sonia Sotomayor as a Supreme Court justice.

"While we may not always agree, Hispanics do have a voice in the administration, and the Latino community does have the president's ear," said Janet Murguia, president of La Raza, which translates literally as "The Race."

But she went on to mention immigration, saying that "unfinished business" remains for Obama.

"Virtually everyone in this room has been affected by our nation's broken immigration system and the record number of deportations," she said.

"I swore an oath to uphold the laws on the books. That doesn't mean I don't know very well the real pain and heartbreak that deportations cause. I share your concerns and I understand them," he said Monday. "We work every day to make sure we are enforcing flawed laws in the most humane possible way."

He also criticized Republicans for not supporting the DREAM Act, which would offer illegal immigrants who came to the U.S. before they turned 16 the chance to become lawful permanent U.S. residents if they meet certain conditions.

"They've walked away. ... The political winds have changed," he said.

As a candidate in 2008, Obama told the National Council of La Raza that comprehensive immigration reform would be a "top priority" during his first year in office.

But three years later -- with no concrete measure to change the nation's immigration system on the horizon -- some say Obama is losing his luster among Latino voters.

"He's still very popular in the Latino community, but there's a real sense of disappointment and, for some, anger, that he promised big, but hasn't delivered," said Frank Sharry, executive director of America's Voice, an organization that advocates immigration reform.

In 2008, Obama made promises he couldn't keep, according to syndicated columnist Miguel Perez.

"Unfortunately, people thought that he could, and so now he's boxed himself in, because Latinos do expect him to solve this problem," said Perez, who is also a journalism professor at Lehman College of the City University of New York.

Obama included among his 2008 campaign stances a goal to "bring people out of the shadows," supporting "a system that allows undocumented immigrants who are in good standing to pay a fine, learn English, and go to the back of the line for the opportunity to become citizens."

Exit polls found that 67% of Latino voters supported Obama in 2008.

Activists said his stance on immigration was one reason behind that support, and that a large turnout among Latino voters was a deciding factor in swing states like Colorado, Florida, New Mexico and Nevada.

The U.S. Hispanic population grew 43% in 10 years between 2000 and 2010 -- four times faster than the total U.S. population -- according to figures from the 2010 census. But currently, people of Hispanic origin make up only about 9% of the eligible electorate, according to the Pew Hispanic Center.

Polls have shown conflicting results about where Latino voters fall on immigration.

An impreMedia-Latino Decisions poll last month said 51% of 500 people surveyed felt immigration reform and the DREAM Act were among the most important issues facing the Latino community.

Obama also discussed the nation's economy and education policies in his speech Monday.