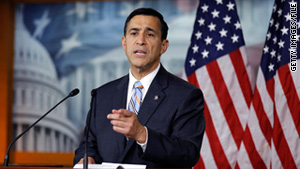 Washington (CNN) -- Two federal officials admitted Tuesday they made "mistakes" during the controversial Operation Fast and Furious gunrunner program, but they disputed contentions by a parade of other agents that their bureau knowingly let guns "walk" into Mexico.

"It was not the purpose of the investigation to permit the transportation of firearms into Mexico," said William Newell, former special agent in charge of the Phoenix field office of the Bureau of Alcohol, Tobacco, Firearms and Explosives. "To the best of my knowledge none of the suspects in this case was ever witnessed by our agents crossing the border with firearms."

Newell's insistence that guns were not allowed to cross the border drew an angry rebuke from Rep. Darrell Issa, chairman of the House committee investigating the program, who called Newell a "paid non-answerer" at Tuesday's hearing.

"Are they (the other agents) lying, or are you lying?" Issa asked Newell.

"We did not let guns walk," Newell responded.

"You're entitled to your opinion, not to your facts," Issa said.

Newell and William McMahon, the head of western field operations for ATF, both painted themselves as dedicated public servants whose only goal was to help dismantled drug cartels that were benefiting from the free flow of weapons from the United States to Mexico.

Both testified previous tactics aimed at catching and prosecuting gun smugglers were ineffective, and Newell said Operation Fast and Furious was "innovative." He said he "made every reasonable effort" to keep his ATF colleagues in Mexico briefed about the investigation. Newell said he should have pressed for quicker action by prosecutors, and should have conducted "more frequent risk assessments."

McMahon said his support for the program was based partly on his experience as assistant special agent in charge of the ATF's World Trade Center office on September 11, 2001, which added to his "zeal" to bring down complex criminal networks.

But with "the advantage of hindsight ... I would have done (things) differently," McMahon said. Asked for one example of a mistake, he said he should have more thoroughly reviewed investigative documents that crossed his desk.

Both McMahon and Newell testified Tuesday at the hearing of a House Oversight and Government Reform Committee.

At the hearing, several ATF agents testified the tactic of allowing guns to "walk" was ill-considered and violated long-established ATF policies and practices.

They also said the ATF failed to inform Mexican authorities of the program, or to even notify U.S. officials in Mexico.

"I can say with authority 'walking guns' is not a recognized investigative technique," Canino testified. "These guns went to ruthless criminals. ... It infuriates me that people, including my law enforcement, diplomatic and military colleagues, may be killed or injured with these weapons."

Canino said Mexican officials regularly complain about American indifference to Mexican violence and death, a view he does not share. "However, in this particular case, with these specific guns, I am unable to defend this operation."

The former ATF attache to Mexico shared that sentiment.

"I would like to apologize to my former Mexican law enforcement counterparts and to the Mexican people for Operation Fast and Furious," said Darren Gil. "I hope they understand that this was kept secret from most of ATF, including me and my colleagues in Mexico."

At the opening of the hearing, Issa, R-California, accused the Obama administration of stonewalling the investigation, saying the Department of Justice continues to withhold information and has "inappropriately interfered" with the committee's work.

"Let me be clear: the Justice Department is not our partner in this effort. They are the subject of this investigation and their continued interference will not be allowed to derail the committee's work," Issa said.

Issa said the Justice Department has blocked efforts to identify those inside the department who were aware of the program, and who endorsed it.

"We have not yet seen the end of the violence from operation Fast and Furious. The deadly consequences of this irresponsible program could last for years to come," Issa said.

"Today the committee estimates at least 1,600 weapons, including .50 caliber sniper rifles, are still out there waiting to kill. The possibility that administration officials, perhaps at the highest level of the Justice Department, approved this strategy and are now trying to cover up their own involvement by stonewalling the committee (is) alarming," he said.

The Justice Department refutes claims by Issa that it refused to cooperate with the congressional investigation and is "pushing away" investigators from senior political appointees at the department.

But Schmaler was critical of a committee report on the matter, saying it "promotes unsubstantiated theories by selectively releasing excerpts of transcripts while ignoring testimony and other information."

"For whatever reason, the leadership of the committee chose not to release witness testimony that makes clear that operational details relating to this investigation were unknown to senior Department of Justice officials," she said. "The department, like the committee, is interested in getting to the bottom of the concerns raised by ATF agents about this operation, which is why the attorney general has asked the inspector general to investigate the matter. The department continues to cooperate with the investigation, but the committee must be willing to share all of the facts."