Visualizing the numbers in the debt ceiling deal 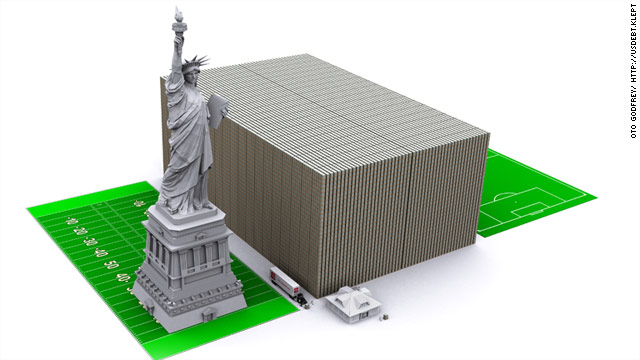 Stacked next to a house, a football field and the Statue of Liberty, the national debt, in $100 bills, would look something like this.
STORY HIGHLIGHTS

(CNN) -- The numbers getting tossed around in Washington during the debt ceiling negotiations can be mind-boggling.

Since the average American will never have, say, $14.3 trillion to wrap his or her mind around, here's how these numbers would stack up if translated into everyday life.

The United States currently has a $14.3 trillion debt ceiling.

With the median sale price of a new home in the United States last year at $221,800, that amount could buy 64,472,498 new houses -- one for every resident of California and Texas combined.

Who will vote for debt deal?
RELATED TOPICS

The White House and congressional leaders reached an agreement Sunday on a proposal that could be voted on by both chambers of Congress on Monday. The deal includes $2.4 trillion in deficit reduction over 10 years.

CNNMoney: What they'll be voting on

The average American household with at least one credit card carries almost $10,700 in credit-card debt, according to CardWeb.com.

The agreement, if passed, would allow a total increase to the debt limit of up to $2.1 trillion or $2.4 trillion, depending on actions by a special joint congressional committee.

What would $2.1 trillion look like? Lined up along the equator, the dollar bills would stretch around the world more than 8,172 times.

Because of a Tuesday deadline to reach a debt ceiling deal before the country risks an unprecedented default, the plan would allow President Barack Obama to have the power to immediately raise the debt ceiling by $400 billion, which would last through September.

The wealthiest American, Bill Gates, is worth $56 billion, according to Forbes magazine. The immediate debt ceiling increase would be akin to 7.14 times Gates' net worth.