Immigration reform in August: why now? 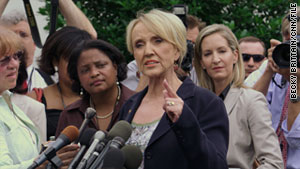 Washington (CNN) -- It's late August. Would you rather hit the beach or discuss immigration reform?

The White House seems to be betting on the former, slipping out news of a major shift in the federal government's approach to illegal immigrants at a time when most Americans traditionally hit the road for summer vacation.

As President Barack Obama packed his bags for Martha's Vineyard this week, the Department of Homeland Security announced its intention to individually review roughly 300,000 pending deportation cases in federal immigration courts. Lower priority cases -- those not involving individuals considered violent or otherwise dangerous -- will be suspended.

Administration officials call it a matter of prioritizing cases and allocating scarce resources more efficiently. Critics call it backdoor amnesty, a way to push through policy changes that conservatives in Congress would never agree to.

This much is clear: the fate of America's roughly 11 million undocumented immigrants remains a polarizing issue. Politically, the timing of the administration's announcement is as relevant as the substance.

"Both the nature and timing of the decision suggest that presidential politics is at play here," said Wendy Schiller, a Brown University political scientist. "Obama has lost ground with his liberal base ... and he absolutely needs strong support in states with large Hispanic populations to keep the White House for four more years."

But right now, she noted, "Congress is out of town so no one is in D.C. to criticize the decision." By having cabinet and other administration officials quietly announce the change, Obama "avoids the photo and speech visual that Republicans (could otherwise) use against him in the 2012 campaign on this issue."

Administrations "do have a tendency to release controversial news in a way that may not generate as much coverage as it might otherwise," said Bill Mayer, a Northeastern University political scientist.

Analysts note that Obama won several Western states in 2008 -- including Colorado, New Mexico and Nevada -- partly on the rising power of Latino voters, a constituency that pays close attention to the immigration issue. Democratic strategists believe the Hispanic vote might also help put traditionally Republican Arizona in play next year.

"For the Latino community, this is a very important action, and people are going to be watching very closely what happens in the implementation," said Clarissa Martinez, a spokeswoman for the National Council of La Raza, a major Hispanic civil rights organization.

"It creates an opening for members of any party that want to speak on a rational approach to immigration policy," she told CNN. "We would hope that there are folks on the Republican side that don't leave (this) platform ... to the president."

Key Republicans don't see it that way. Republican leaders have used immigration in the past to fire up conservative voters opposed to any form of leniency for people in the country illegally. Some analysts believe that if Democrats push too hard, too fast on immigration, particularly in tough economic times, it could push swing voters to the GOP.

The Obama administration "has resorted to implementing its plans via executive fiat," Arizona Gov. Jan Brewer said Thursday. "Those of us who truly care about the rule of law will remember the president's actions."

Brewer signed a state law last year requiring local law enforcement in Arizona to apprehend and help deport illegal immigrants, among other things. The U.S. Justice Department sued, arguing that only the federal government has that authority.

Earlier this year, a three-judge panel on the 9th Circuit Court of Appeals sided with Justice officials and against Brewer.

Alabama, Georgia, Indiana, and Utah have passed similar laws, but those measures have also been put on hold, according to Martinez.

At the moment, most voters appear to be tuning out the immigration debate. A CNN/ORC International poll conducted earlier this month showed only 4% of voters consider illegal immigration the most important issue facing the country. An overwhelming majority -- 60% -- cited the economy as the top issue, followed by the deficit at 16%.

But precisely because of the shaky economy, the immigration issue could quickly flare up again.

"There are some blue collar workers and people who are less well off who think immigration is hurting them," said Mayer. If those people start to focus on the issue, he argued, revising federal policies in the dog days of August won't keep the matter on the sidelines.

"This kind of (policy rollout) may have worked 30 years ago," Mayer said. "But given the way the media has developed, people on the other side will still be able to respond via talk radio and cable television and blogs."