ATF head reassigned in wake of 'Fast and Furious' controversy 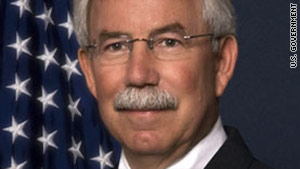 Kenneth Melson became acting director of ATF in 2009. He has been reassigned to the Justice Department.
STORY HIGHLIGHTS

Washington (CNN) -- In steps Tuesday reacting to the controversial Operation Fast and Furious, the Justice Department announced the reassignment of the head of the federal firearms agency and the resignation of a U.S. attorney whose office provided legal guidance for the program involving illegal weapons sales.

Kenneth Melson, who came under criticism for the Bureau of Alcohol, Tobacco, Firearms and Explosives operation as the agency's acting director, will become a senior adviser on forensic issues as of Wednesday, the Justice Department said. The statement added that B. Todd Jones, a U.S. attorney from Minnesota, will become the acting ATF director, also starting Wednesday.

In a separate announcement, U.S. Attorney for Arizona Dennis Burke resigned in the aftermath of the operation, which is under congressional scrutiny. Burke's office gave legal guidance to ATF for Operation Fast and Furious.

Accompanying statements by Attorney General Eric Holder, Melson, Jones and Burke avoided any mention of the operation, which was intended to prevent gun-trafficking to Mexican drug cartels.

However, Melson's departure had been expected, and the timing of announcing both Melson's reassignment and Burke's resignation indicated a desire by the Justice Department to distance itself from the operation.

Operation Fast and Furious allowed thousands of heavy-duty assault-type weapons to be illegally purchased. In the operation, "straw buyers" -- people who buy the weapons for others who might not legally be allowed to buy them -- were allowed to purchase illegally large numbers of weapons, some of which ended up in the hands of cartels in Mexico.

The operation has come under intense criticism since the December killing of U.S. Border Patrol Agent Brian Terry in Arizona. Two weapons that were allowed to be sold under the Fast and Furious program were found at the crime scene.

"This move by the administration indicates that Director Melson may be being used as a scapegoat for a much larger problem within ATF and DOJ," said Rep. Lamar Smith, R-Texas, the chairman of the House Judiciary Committee.

Republican Sen. Charles Grassley of Iowa, a leading critic of Operation Fast and Furious, said the announcements amounted to "an admission by the Obama administration that serious mistakes were made."

Last month, Grassley and Rep. Darrell Issa, R-California, sent letters to agencies including the FBI and the Drug Enforcement Administration demanding specific information and documents on the operation.

The letters followed a closed July 4 meeting between investigators and Melson, who sources said indicated FBI and DEA involvement in the controversial firearms purchasing operation.

Federal law enforcement officials familiar with the case said Melson was fighting to keep his job and was unwilling to be a "fall guy" for Operation Fast and Furious.

The letters called for answers to a series of questions about informants, FBI and DEA officials in Arizona and Texas, and the case agent from Tucson in charge of the Terry murder investigation.

Operation Fast and Furious was "a colossal failure of leadership," Peter Forcelli, an ATF supervisor in Phoenix, has said.

The program focused on following people who legally bought weapons that were then transferred to criminals and destined for Mexico. But instead of intercepting the weapons when they switched hands, Operation Fast and Furious called for ATF agents to let the guns "walk" and wait for them to surface in Mexico, according to a report by the House Oversight and Government Reform Committee.

The idea was that once the weapons in Mexico were traced back to the straw purchasers, the entire arms smuggling network could be brought down. Instead, the report argues, letting the weapons slip into the wrong hands was a deadly miscalculation that resulted in preventable deaths, including that of Terry.

In Mexico, the case has drawn nationwide attention and sharp criticism from top officials, who have long stressed that U.S. weapons are fueling the country's drug war.

The Mexican attorney general's office demanded a quick U.S. investigation of the matter in March and said authorities must hold accountable anyone who was responsible for the operation.

Melson, who became acting director of ATF in 2009, will focus on policy development in forensic science in his new role with the Office of Legal Policy, according to the Justice Department.

"I want to thank Ken for his dedication to the department over the last three decades," Holder said in the statement. Jones, Melson's successor, is a "seasoned" prosecutor and former military judge advocate "who brings a wealth of experience" to his new position leading ATF, Holder's statement said.

Jones, in his own statement to ATF employees, acknowledged what he called "a challenging time for this agency, and for many of you."

In a separate statement on Burke, Holder said, "I commend his decision to place the interests of the U.S. Attorney's office above all else."

For his part, Burke said in his own statement that it was "the right time to move on to pursue other aspects of my career and my life and allow the the office to move ahead."