Obama to unveil jobs plan in a speech to Congress 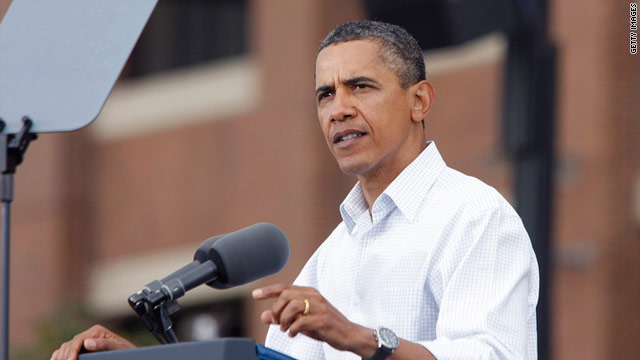 Washington (CNN) -- President Barack Obama is preparing to roll out proposals Thursday totaling $300 billion or more to strengthen the shaky economy and stimulate new job growth, according to Democratic sources.

While some sources put the size of the package at roughly $300 billion, one Democrat familiar with the president's plan said Wednesday that the working figure was growing and could top $400 billion.

The plan would be paid for partly by closing corporate loopholes and raising taxes on the wealthiest Americans in the future, one Democrat familiar with the plan told CNN.

Obama is expected to unveil his proposal -- focused largely on infrastructure spending, targeted tax cuts and aid to state and local governments -- during a Thursday evening address to a joint session of Congress.

"I'm going to propose ways to put America back to work that both parties can agree to, because I still believe both parties can work together to solve our problems," the president said in a Labor Day speech in Detroit.

White House spokesman Jay Carney told reporters Wednesday that the plan would comprise steps that are "reasonable, pragmatic and effective" by "any objective analysis." Carney also repeatedly insisted the package would be fully paid for, though he refused to provide details.

The measure could include $120 billion to extend the current payroll tax cut, according to the source familiar with the plan. The cut, which cost $112 billion so far, allows employees to pay 4.2% instead of 6.2% on their first $106,800 of wages into Social Security.

Obama's proposal could also include $50 billion to extend further unemployment benefits, which were lengthened to the current 99-week maximum in 2009. Top Democrats argue that such money will immediately be pumped back into the economy in the form of new consumer spending.

In addition, the plan could propose $100 billion for infrastructure development such as repairing roads and bridges.

The plan's prospects in a sharply polarized Congress entering a new presidential election season appear murky at best. Some Republicans have already dismissed it, saying any proposal from the president will amount to little more than a continuation of what they characterize as his failed 2009 stimulus plan.

Rep. Paul Broun, R-Georgia, is not planning on attending Obama's speech, choosing instead to comment on it via Twitter, according to his office.

Steve Bell, senior director of the bipartisan Economic Policy Project, said Wednesday that the scope of the plan is too small.

"It doesn't even sound good," he said, arguing instead for a $640 billion, 12-month payroll tax holiday for employers and employees.

"I want leadership that gives me an environment where I can plan for the future," she said.

Among the other options believed to be under consideration by the administration: $30 billion to refurbish schools, along with more money in state aid for both teachers and first responders.

Cash-strapped municipalities could receive federal assistance through a new version of the expired Build America Bonds program, which allowed state and municipal agencies to issue taxable bonds with the federal government subsidizing 35% of the interest payments. Money raised through a renewed version of the program could be used for a variety of infrastructure projects.

Obama's proposal could also include patent reform and the creation of an "infrastructure bank" started with as little as $10 billion to help spur new private-sector projects. Ultimately, interest paid on the loans would make the bank self-sufficient.

Meanwhile, small businesses could be targeted with a number of incentives designed to encourage hiring, including an employer payroll tax cut, tax cuts for hiring Iraq and Afghanistan war veterans, and tax credits for hiring the long-term unemployed.

Obama may also propose a new jobs training program modeled on a Georgia initiative that allows those receiving unemployment insurance to be placed at a local company for up to eight weeks of training.

In addition, a repatriation tax holiday has been under consideration. American corporations currently have more than $1 trillion stashed overseas to avoid paying the 35% corporate tax rate. If lawmakers were to pass a repatriation measure, companies may be allowed to bring that money back to the United States while paying a reduced tax rate.

Proponents of such a measure argue that corporations could use the funds to hire more workers.

Looking abroad, the president is considered likely to renew his push for congressional approval of stalled free trade deals with South Korea, Colombia and Panama. The measures, despite the congressional roadblock, have relatively broad bipartisan support.