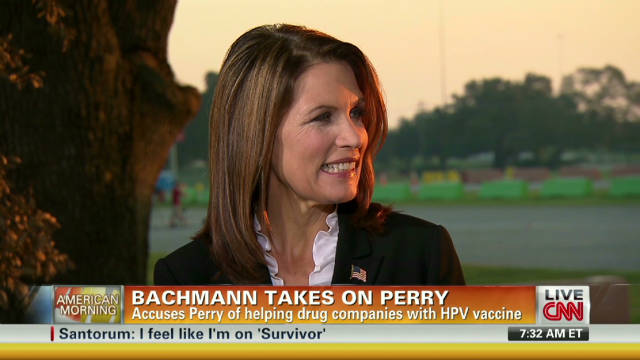 (CNN) -- During Monday's CNN/Tea Party debate, Rep. Michele Bachmann criticized Texas Gov. Rick Perry's short-lived 2007 executive order requiring girls to get a vaccination for human papillomavirus, claiming in part that his former chief of staff lobbied for the drug maker, and that the company made millions of dollars because of the order.

Bachmann: "We cannot forget that in the midst of this executive order, there was a big drug company that made millions of dollars because of this mandate. We can't deny that."

Perry in February 2007 signed an executive order directing the state Health and Human Services commissioner to mandate human papillomavirus vaccination for all girls before admission to the sixth grade. Perry at the time released a statement saying that the vaccine "provides us with an incredible opportunity to effectively target and prevent cervical cancer," which HPV can cause.

At the time, the only such vaccine that the Food and Drug Administration had approved was Gardasil, made by Merck & Co.

Texas' rules were to take effect in September 2008. However, the Texas Legislature passed a bill overturning Perry's order in April 2007. Perry declined to veto the bill, which went into effect in May 2007, killing his order.

False. The executive order didn't last long enough to produce a mandate. Therefore, there was no mandate that would have caused Merck to make millions of dollars.

Bachmann: "The governor's former chief of staff was the chief lobbyist for this drug company."

Michael Toomey, a former three-term state representative from Houston, served as Perry's chief of staff from December 2002 to September 2004.

Toomey was a lobbyist for a number of companies -- including Merck -- before and after he served in Perry's office, according to the Texas Ethics Commission. He was registered in Texas to lobby for Merck from at least 1998 to 2002, and from 2004 to the present, according to the commission.

True. Toomey was a lobbyist for Merck. However, CNN could not find evidence to confirm or dispute that he was the company's "chief lobbyist."

Perry's defense: "The company was Merck, and it was a $5,000 contribution that I had received from them."