Occupy Wall Street: The tea party of the left? 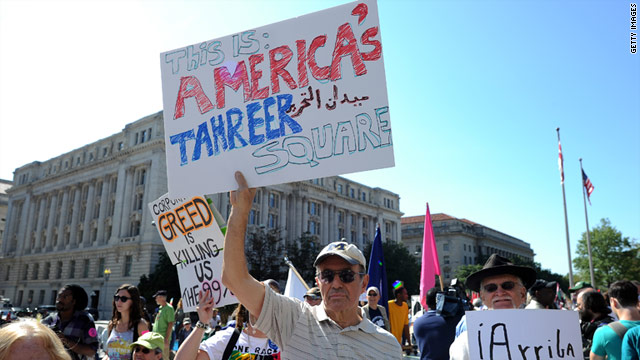 Anti-corporate protesters display banners as they take part in a "Occupy D.C." protest in Washington on Thursday.
STORY HIGHLIGHTS

Washington (CNN) -- Wall Street should have seen it coming. After all, market forces were at work.

Take a financial crisis that yielded few prosecutions; add a broken government in Washington; then mix in millions of unemployed adults with nothing but time on their hands and it's no wonder Occupy Wall Street came screaming out of the economic chaos.

The calls for revolution echoing from Lower Manhattan to Washington and the rest of the nation are also conjuring up comparisons to the battle cries of another political movement, the tea party.

"It's time to get crazy," Occupy D.C. protester Kay Deamer said at a rally organized by a variety of liberal groups on Capitol Hill. "In fact our country is getting too crazy in a way that's unhealthy for the ordinary American people. And so any way that we can, we got to get people to wake up," Deamer added.

Both Occupy and tea party movements are angry. They just see different remedies.

Gallery: Who are the protesters?

When tea party rallies flared up across the country more than two years ago, conservative activists were mad about bailouts and their impact on the national debt. To them, government was part of the problem.

Occupy vs. the tea party?

Occupy demonstrators are also upset about the financial crisis and the economy. But they see government as part of the solution.

"There's a general sense that we're getting screwed and we need to fix things," Occupy D.C. protester Eric Lotke said at the same rally. Unlike the tea party, Lotke would raise taxes on the rich to pay for bridge and school construction projects to put people back to work.

But if Lotke had a tri-corner hat, he said he would tip it to the tea party for showing the Occupy movement how to turn anger into action. "Some of it is tea party. And some of it is hippies," Lotke said of the Occupy protests.

With all of that rage, tea partiers can attest, trouble can brew quickly.

Open story: Are you involved?

During the height of the tea party movement, there were few confrontations with police. But violent rhetoric was often caught on camera and immediately uploaded onto YouTube.

"If ballots don't work, bullets will," tea party activist and radio talk show host Joyce Kaufman said at a rally about the midterm elections of 2010.

Still, many tea party organizers are offended by the comparisons.

"When you talk about the people on Wall Street, I think that those young people and the people who are struggling are doing a great service. They may not have message clarity, but they have moral clarity," Jones said. He now leads the liberal activist group, Rebuild the Dream, which now seeks to join forces with the protesters.

Those sentiments may explain why the top two men at the White House are all but saying "we feel your rage."

"I think people are frustrated and the protesters are giving voice to a more broad based frustration about how our financial system works," President Barack Obama said at a news conference Thursday.

"There's a lot in common with the tea party. The tea party started why? TARP. They thought it was unfair. We were bailing out the big guys," Vice President Joe Biden said at a different public event earlier in the day.

The trick for this new movement, as it was with the tea party, is to keep things from boiling over.