Celebrities take to the web, text and tweet for Japan 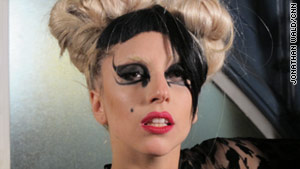 Pop star Lady Gaga is offering a "We Pray for Japan" wristband as a way for her fans to help with relief efforts.
STORY HIGHLIGHTS

(CNN) -- Celebrities from Lady Gaga to Linkin Park rallied their fans to ante up for earthquake and tsunami relief in Japan.

Lady Gaga is offering a red-and-white wristband, with the words "We pray for Japan" and an image of the singer's monster paw gesture.

"Little Monsters, show your support for Japan with this 'We Pray For Japan' wristband!" her website said, encouraging her fans to donate. "All proceeds go directly to Japan relief efforts."

Gaga also directed fans to the Citizen Effect web page where they can contribute to a campaign by Google CEO Eric Schmidt and his wife Wendy. The couple will match the first $100,000 donated to help American Red Cross relief efforts in Japan.

Mike Shinoda of Linkin Park has designed a T-shirt to benefit Music for Relief's Tsunami Relief in Japan. Donations of $10 can be made by texting "MFR" to 85944.

Music for Relief also established a fund after the Haiti earthquake.

Starting Tuesday, people wanting to donate also will be able to contribute at downloadtodonate.org. Anyone giving $10 or more will be able to download a collection of new songs.

"Imagine... if we ALL texted REDCROSS to 90999 we'd have raised over 60million dollars for #JAPAN REFLIEF! BE THE CHANGE YOU WANT TO SEE! BE!," said a post on singer Katy Perry's Twitter on Sunday night.