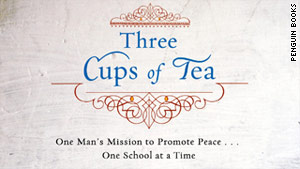 Greg Mortenson has been accused of fabricating key portions of his book "Three Cups of Tea."
STORY HIGHLIGHTS

(CNN) -- Two Montana legislators have put their names behind what they hope will be a class-action lawsuit aimed at Greg Mortenson, who has come under fire for allegedly fabricating details in the best-selling book "Three Cups of Tea."

The lawsuit, which also names Mortenson's Central Asia Institute charity, was filed Thursday in a federal court in Montana by attorneys Alexander Blewett III and his son, Anders Blewett, the latter of whom is a Democratic member of that state's legislature.

The plaintiffs are Michele Reinhart of Missoula and Jean Price of Great Falls, both Democratic representatives in Montana.

Alexander Blewett III, a Helena-based attorney, said the intent is to eventually open up the suit to anyone who'd bought a book by Mortenson or donated to the Montana-based charity he heads. He said the two plaintiffs hope is to collect money, should the lawsuit prevail, and use it to spur educational efforts in Afghanistan, as the charity has purported to do.

"People now realize they were deceived: They bought books and gave money based on false pretenses," Blewett said Friday. "(The plaintiffs) want to try to get this money into a trust, and use it to actually build schools."

Mortenson shot to worldwide fame with "Three Cups of Tea: One Man's Mission to Fight Terrorism and Build Nations ... One School at a Time," which describes his getting lost in an effort to climb K2, the world's second-tallest mountain, being rescued by Pakistanis in the village of Korphe and vowing to return there to build a school for local girls.

The riveting story led to the creation of the Central Asia Institute, an organization that works to improve girls' education in Pakistan and Afghanistan. Co-written with David Oliver Relin, the book has become a international publishing phenomenon since it was published five years ago, spawning a sequel, two children's editions and translations in 19 countries.

The charity did not immediately respond Friday to a request for comment on the proposed class-action lawsuit. It referred CNN to earlier remarks it and Mortenson have made, which deny that the fundamental stories behind the best-seller are untrue.

The charity's website also posted a statement from one of Mortenson's doctors, Pamela Hiebert, saying that the author has a hole in his heart that has led to chronic low oxygen levels in his blood. As of Monday, an angiographic procedure that had been scheduled for last week had been postponed and Mortenson was at home on bed rest, where he was receiving oxygen but not allowed to use electronics, according to Hiebert.

Is 'Three Cups of Tea' fact or fiction?
RELATED TOPICS

Several weeks earlier, when a critical "60 Minutes" segment came out, Mortenson defended his stories and charity. He wrote, in comments posted on the Central Asia Institute's website, that the CBS report "paints a distorted picture using inaccurate information, innuendo and a microscopic focus on one year's" tax return for the Montana-based charity.

And two days before the piece aired, he wrote, "I stand by the information conveyed in my book, and by the value of CAI's work in empowering local communities to build and operate schools that have educated more than 60,000 students."

Yet the lawsuit filed this week claim that both Mortenson and his institute "repeatedly fabricated material about his activities and work in Pakistan and Afghanistan ... to induce unsuspecting individuals to purchase his books and donate to CAI."

Mortenson "committed actual fraud" against the plaintiffs -- one of whom bought a book, while the other gave to his charity -- the lawsuit alleges.

"The conduct of Mortenson and CAI constitutes malice and/or other egregious conduct, for which a jury should award punitive damages," according to the lawsuit.

Blewett explained that a federal judge will now decide whether the lawsuit can be a class-action, which would mean anyone who bought Mortenson's book or given to his charity -- even if they live outside Montana -- can join as a plaintiff. The lawsuit specifically mentions the creation of a "constructive trust" that would funnel money from the lawsuit to charitable works.

Ultimately, Mortenson and his charity could face a jury trial, based on the lawsuit's claims.

"We (could) could have our opportunity to present the testimony, and we'll see what the jury says," said Blewett. "We are convinced that the vast amount of what (Mortenson) said is false."

Weeks before this lawsuit came to light, Montana Attorney General Steve Bullock said in a statement his office is looking into the Central Asia Institute.

The organization recorded income of $14 million in 2009, the vast majority of which was raised from private individuals, many of whom may have been inspired by Mortenson's books.

However, in 2009, less than half of that money actually went to building schools in Afghanistan and Pakistan, and $1.7 million went to promote Mortenson's books, according to the institute's board of directors.