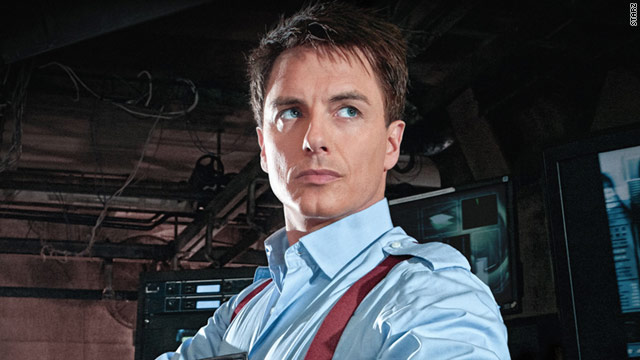 (CNN) -- Any time there's a change in the Whoverse (the intergalactic space that occupies the storylines of British sci-fi show "Doctor Who" and its spinoffs, "The Sarah Jane Adventures" and "Torchwood"), fans of the franchise get nervous.

And creator Russell T. Davies is bringing quite a change to "Torchwood." (The name is an anagram of "Doctor Who.")

"Torchwood" fans have been jonesing for more of series star John Barrowman's antics as Capt. Jack Harkness for the past two years. During the prolonged hiatus, Davies aligned the franchise with subscription cable channel Starz and moved the entire setting of the show from the U.K. to the U.S.

Fans are curious about what's happened to their favorite characters in the meantime and what a bigger budget could mean for the show.

"Torchwood" started in 2006 as a BBC prime-time sci-fi show about a character and investigative team that originated on the popular "Doctor Who" reboot.

Barrowman's character is a mysterious, immortal man from the 51st century who adopted the identity of a World War II Royal Air Force pilot and ultimately ended up protecting mankind with the help of a secretive alien-hunting team of Earthlings.

The last season of the series, titled "Torchwood: Children of Earth," was broadcast in 2009, and the storyline followed the decimation of Capt. Jack's Torchwood team, including the painful loss of his romantic partner, Ianto Jones.

At the end of "Torchwood: Children of Earth," the surviving team was officially disbanded.

"The last time we saw Jack, he was drowning his sorrows in the 'Doctor Who' version of the 'Star Wars' cantina," said Jennifer Steele, a 29-year-old Whoverse fan and Alta Language Services project manager in Atlanta.

So what brought Capt. Jack back to Earth for "Miracle Day"?

Barrowman isn't spoiling the surprise -- which he says changes everything -- but wants fans to rest assured that the quirky, silly heart of "Torchwood" is back.

"Whatever issues he had, he's gone off and dealt with, and now he's come back refreshed and raring and ready to go," Barrowman said.

And so is his libido. Barrowman is keen to point out that fans will see Capt. Jack have "full-on man sex in this series," which shouldn't shock sci-fi fans in the least.

Barrowman said his point of view on the acceptance of sexualities in television, as a gay man, is the same as that of sci-fi fans.

"If you don't like me for who I am, do I really need to know you? I think that's the attitude that sci-fi fans have, too. We're not going to let people dictate that we should be something other than who we are," he said.

Relationships have been a hallmark of Davies' work on "Torchwood" and "Doctor Who."

"I know Russell T. Davies has taken a lot of flak for all the relationships on Doctor Who," Steele said, explaining that before Davies rebooted the franchise, the character of the Doctor had been largely asexual since the 1960s.

"Jack Harkness has relationships with everybody, because that's the kind of person he is," she said.

"It was a great moment. I loved it," Barrowman said. "Walking through the saloon doors, right up to each other, looking like we're just going to punch the crap out of each other, and then they kiss! Brilliant!"

The character of Jack Harkness is not necessarily gay or bisexual. "Despite the fact that Jack is 'try-sexual' -- he'll try anything -- his relationship with Ianto reached a peak in 'Children of Earth,' " said Edward DeGruy, British sci-fi fan and senior director of guest hospitality for DragonCon, a fan convention in Atlanta.

"When Ianto's sister asked him, 'Well, you're dating this guy; does that mean you're gay?' and Ianto looked at her and said, 'I don't know, but I know I love Jack.' "

That focus on how many people in this world can love one specific person is very nerdy, DeGruy said. "Sci-fi fans have realized that a relationship is a relationship. However that relationship happens for you is what's important.

"We all have our own beliefs, and fandom believes that one day the world will move in the direction where everyone says, 'Your belief is your belief, and your way of living is your way of living. As long as you're not hurting me, I don't care what you do.' "

And although sci-fi fans deeply identify with the characters on the show, it's the writing on "Torchwood" that keeps fans dedicated, DeGruy said.

"Especially to (fans of writer Joss Whedon), because that was Joss' bread and butter. He can write conversations probably better than anyone in the business today. Russell T. Davies being a very close second."

"I think now that 'Torchwood' has really hit its stride, Davies is doing a better job than he did on 'Doctor Who,' " Steele said.

Barrowman says the secret to the show's success is that the entire creative team is made up of science-fiction fans.