The 'Harry Potter Generation' opens at the close

By Andrew Slack, Special to CNN 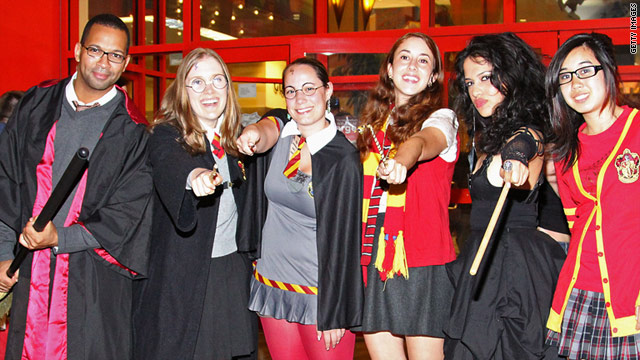 Fans in New York dress up in Harry Potter style to attend the opening of "Harry Potter and the Deathly Hallows Part II."
STORY HIGHLIGHTS

Orlando, Florida (CNN) -- As I write this from a conference of 3500 Harry Potter fans outside of the Wizarding World of Harry Potter theme park in Orlando, the energy in the air around the final film is not only excitement, but gratitude.

We are grateful for the bonds of friendship we have made in this fan community and grateful for those "other friends" we know we can always visit in Hagrid's hut, to sit down over tea and rock cakes and plot new adventures.

We've spent years being called "delusional" for taking the Gryffindor Common Room, the Great Hall at Hogwarts, and the sweet shops in Hogsmeade so seriously -- as if they were real. As if they were nothing more than a cheap way to escape from our daily reality.

But as the book comes to a close, Dumbledore reminds us that "Of course it is happening inside [our] head...but why on earth should that mean that it is not real?"

Reality is mysterious. And the reality is that a fantasy book aimed at children has forever changed writing, publishing, literature, music, sports, social media and social activism.

In a digital age filled with families lining up for iPods, iPads and iPhones, there was one exception to the rule: For well over a decade, millions lined up at midnight to get their hands on a copy of a hardback book. Translated into almost every language as it seamlessly cuts across cultures, Harry Potter became the most requested book by detainees in Guantanamo Bay (outside of the Quran).

The reality is that Harry Potter has taught a generation to be creative, compassionate and courageous as we continue to love.

For some, the final film means it's an end of an era. Not for me and not for most fans. As we approach the final film in the Potter franchise, I'd like to point out that the moment in book seven when a Golden Snitch Harry is holding "opens at the close" so too does the Harry Potter Generation -- our minds, our hearts, all open at the close.

Like the snitch, we "open at the close." The advent of the seventh movie is not an ending, but an opportunity to take what we have learned at Hogwarts into the world.

The organization that I run, the Harry Potter Alliance, inspiriing fellow fans to act as Harry would in our world. We've sent five cargo planes to Haiti, donated more than 88,000 books across the world and funded the protection of civilians in Darfur and Burma.

Right now we are negotiating with the CEO of Warner Brothers to make all Harry Potter chocolate fair trade so that the Harry Potter brand is no longer associated with the practice of child slavery that is common in the cocoa trade. To date we have the signatures of more than 15,000 Harry Potter fans including four stars of the films.

In a world that is, like Harry's, often in dark and difficult times, we in the Harry Potter Generation are ready to open at the close. We are ready Ms. Rowling, Harry, and Dumbledore. Thank you for preparing us. We look forward to this last film and we will see you soon!