The lessons of Neville Longbottom 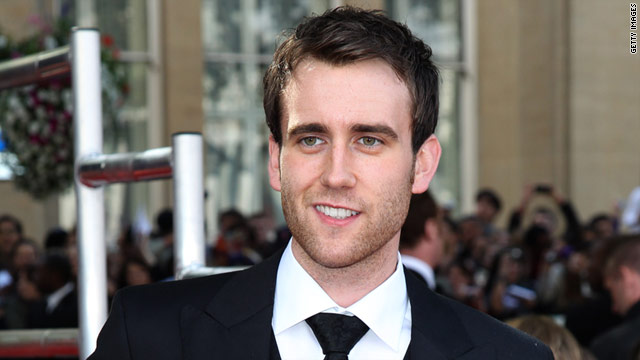 (CNN) -- Actor Matthew Lewis, who spent the last 10 years portraying Neville Longbottom, the awkward, nerdy pal to the trio of students at the center of the Harry Potter films, is moving on.

As the last of eight films based on the books by J.K. Rowling hits movie screens across America, Lewis spoke with CNN about his journey as Neville and how it has not just affected him, but prepared him for a career as an actor.

CNN: Neville Longbottom starts out as a pretty psychologically wounded character, and you have been able to portray his journey of personal growth. Most people pay a lot of money to psychologists to make a journey like that. What life lessons have you learned from Neville?

Lewis: Oh wow. the great thing about Neville -- what message he conveys that J.K. Rowling wrote for him -- was that you can have any kind of disadvantage at the start of your life and it doesn't define you. You can still go on to be whoever you want to be. As long as you have friends around you and you have a belief in doing the right thing, you can go on to be a hero. It doesn't matter what humble beginnings you came from. I think that's really inspiring. I think that's a really nice life lesson.

CNN: What do you think fans like best about Neville? What do they identify with?

Lewis: It's really the underdog success story of it all. Everybody loves an underdog, but crucially, it's the message that a lot of people can have a pretty lousy time at school. A lot of people struggle in their younger years and I think people can relate to that. And Neville shows that's not the be all end all. You can still go on to do great things in your life. What I've gathered from fan mail and meeting people is that that's quite inspiring, and it helps some people get over bullying at school or whatever difficult problems they're having in life. As an actor, that's the loveliest thing in the world to think that something you're doing, what your job is, is inspiring people.

CNN: Is there a difference between U.K. and U.S. fans' reaction to Neville?

Lewis: You know, it's a very similar reaction only it's different in terms of -- how do you explain it? -- I guess Americans tend to be quite a lot louder. But the responses are the same with varying degrees of excitement.

CNN: A lot of people are probably surprised by the man you grew into. Your nerdy look in the films, even your slightly crooked teeth, were very endearing to fans, and you look quite different now. What has coming out the other end of Harry Potter been like for you personally and professionally?

Lewis: Well, it's a really exciting time to be honest with you. When the films finished I obviously had a degree of sadness about it all coming to an end. Having done something that you've loved so much for such a long time, it's obviously going to be sad when it comes to an end. But it's also an exciting time because for the first time in a decade, I don't know what's coming next. And really, it's the opportunity now for me to show that I'm not just Neville Longbottom, there is more that I can do, and I really just want to sort of push myself. It's a transitional period at the moment, and we'll have to see what happens next.

CNN: Do you like the fantasy genre as an actor, or is there a different genre that inspires you?

Lewis: Genre is not something I particularly look at. I just want to be an actor -- in theater, on television, in film. I love the idea of being able to become somebody else, and it's like being a child and never having to grow up. I can dress up in fancy dress and play make believe as a job and people pay me to do that.

It's fantastic. I never have to get old. But I would love to do something grittier. I'd love to do sort of a war picture or a gangster film or something much more real life. But I can't begrudge the fantasy genre. I'm a huge fan of "Lord of the Rings," "Harry Potter" and "Star Wars," science fiction, that kind of stuff.

Lewis: I've got two. One's Harry Potter related and one's definitely not, but it came about because of Harry Potter. The first one, the Harry Potter one, was my first week at work. It was in Annik Cathlin in Northumberland, England, and it was the broomstick lesson when Neville Longbottom gets on the broomstick and is flying around and crashing into walls.

I just remember being so frightened of the whole process of being in this big, big film. And then I was told by Christopher Columbus that the first scene I would be doing was all about me and I would be working with the stunt team. It was very nerve-wracking, but he put me at ease and made me relax, and it ended up being the most fantastic week. I remember being very excited for the next six months or so. Little did I know that it would go on for another decade.

And the other thing that I will never, ever forget is being able to meet Sir Paul McCartney, which definitely came about because of Harry Potter, and I'll never forget that. He's a personal hero of mine. What a fantastic night.

CNN: Has J.K. Rowling let you know what she thinks of how you brought her character to life?

Lewis: Yes. And it's obviously something I was really concerned about. J.K. Rowling is just the most incredible author, and I've loved her stories since I was a boy of 9 years old. I was so focused on getting it exactly how she imagined it in her head. And a couple times I spoke to her at premiers and she came to the studio and said, you know, I'm doing it right. It's exactly how she wanted it. And as a compliment you can't get much better than that.

To have J.K. Rowling say that, it was just the most amazing feeling. And she was so lovely. She mentioned it on the red carpet, as well, on [last]Thursday in London, and it's a nice thing to hear. It's great for the fans to love what we do, but for J.K. Rowling to enjoy it, too, it just means so much.

CNN: What will you do now? After a thrilling end to such a consequential pop culture event, many people might say, "I'm going to Disney World." Where are you going?

Lewis: I've been doing theater for the past six months in the U.K. Alan Rickman told me to do theater, he recommended theater, and so I did. And it was really a learning experience for me. I wanted to expand my ability, and I want to try and learn as much as possible and really add another string to my bow, if you like. I feel like I've grown in confidence as a person and an actor in theater. It really is a foundation for all acting, whether in television or film. It really is where it all started.

So I would not mind going back in the theater at all, but I've got a couple of things that I'm reading through at the minute. I've got a meeting when I get back to London, as well, in a couple of weeks. I want to take what I've learned in the theater and what I've learned on Harry Potter in the last decade and really just take it to the next level. Forge out an acting career.