Tom Felton is 'Team Slytherin' all the way 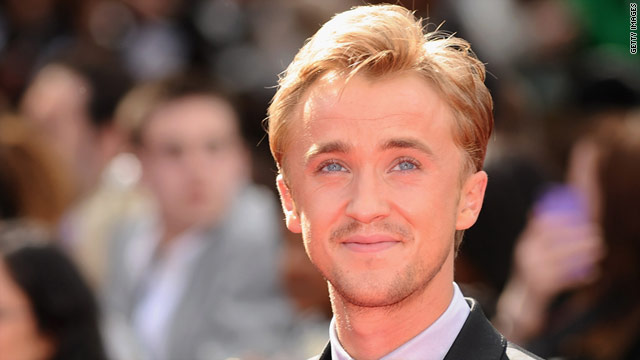 (CNN) -- As the blondest brat in the Harry Potter universe, actor Tom Felton has no qualms about portraying the theoretically unlikable Draco Malfoy. So why do so many fans devote themselves to "Team Slytherin?" Felton muses on the possibilities with CNN.

CNN: You have a fairly active dialogue with your fans. Can you explain to the muggles why fans are so into "Team Slytherin?"

Felton: I definitely can't answer; I have no idea. I'm always curious when 7-year-olds and 8-year-olds come up to me and say, "Yeah, Draco's my favorite character." I always think, "Hmmm, I'm not sure if he should be."

I'm not sure. I've been told that people like a bad guy, or I guess people love to hate someone. I guess Draco has filled that role for quite a few years. But yeah, I'm "Team Slytherin" all the way.

CNN: Was it ever difficult to play such a mean-spirited and dirisive character as Draco Malfoy?

Felton: Nothing but joy. I took great joy in every minute of it. It was like playing the polar opposite of me, really. It was kind of easy to step into his shoes and be delightfully horrible to everyone around me. I really enjoyed it and it never struck me as being difficult. Which is a little strange, in itself. I guess there's an evil kid inside me waiting to get out.

CNN: Is it ever possible for you to have a good hair day after a decade of bleaching your locks for the role?

Felton: Not really. I'm just grateful that I still have hair on my head after that many years of dying it. So yeah, it's actually turned back to its normal condition and is in not bad shape. Thanks for asking.

CNN: What kinds of perks do you get for being a part of the Harry Potter franchise? Do you get a lifetime supply of butter beer?

Felton: I've yet to cash in that coupon. What perks? We get the DVD a week before it comes out. We've been a couple of times to the Orlando theme park, the Wizarding World, and when we're there we're usually told to drink as much butter beer as we like. So yeah, you could call that a lifetime supply, I guess.

CNN: Harry Potter has established itself as a consequential fantasy franchise. Has it influenced your tastes or is there a different genre that inspires you?

Felton: I'm sure Harry will go down as this kind of fantasy thriller, but I see it as everything. It's a romantic comedy, it's dark humor, it's kind of everything in every one of the films. It encompasses a lot. I'm not really a genre kind of guy. I don't like to label films with a genre. I like all films whether it's dark or light, love, hate, whatever it is, I enjoy it.

CNN: Was it ever heroes vs. villains on the set? Did you have a "Team Baddies?"

Felton: You mean as the actors? No, not really. Bear in mind, we usually spend about 2% of the day in character, the rest of it is just us. So most of it is just normal chat. I hate to sound boring!

CNN: Do you have a favorite memory of your time spent on the Harry Potter films?

Felton: I don't really have one, that's sort of like saying pick your favorite memory of the last 15 years. Everyone asks that. It's the whole experience. The people that we work with, the relationships that we've made, the costumes we got to wear and all the stupid stuff we got to do. It's just the whole experience really. it's very hard for me to pick one memory.

CNN: What's the most unexpected thing about being a part of Harry Potter?

Felton: She's exceptionally down to earth. She's one of the most down to earth people I've met. She's very, very sweet -- I'm always blown away by how down to earth she is. She's a really, really nice person and it's always a pleasure getting a chance to hang out with her.

CNN: So many people around the world are fans of Draco. What is Draco a fan of?

Felton: Other than villainous ways? He's a fan of snakes. Slytherin. Evil deeds. You know what, it's weird because that's kind of a changing question. Because in the recent films I think it's slightly different. Probably freedom and, you know, not his parents. It's a tough one. He's a character with two sides.