A day at the 'Con with Jon (Cryer)

By Mark Rabinowitz, Special to CNN 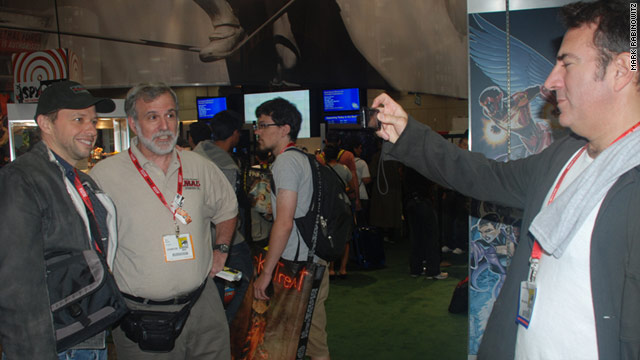 By way of full disclosure, I have known Jon Cryer and writer/director Richard Schenkman for roughly 15 years and consider them friends.

The thing is, even if I wasn't a friend, not much of this piece would change -- certainly none of my observations about the subjects or their interactions with the public. It is also important to note that any air of complaint that might waft from this piece is mine and mine alone. I'm the one annoyed by the crowds, and I'm the one who gets frustrated.

Let me just say, right off the bat, that the first two hours of my day were an exercise in futility, full of ineptitude (mine), bad luck (mine), ignorance (mine) and poor planning (Los Angeles County MTA).

The goal was to make an 8:30 a.m. Amtrak train to accompany Jon and Richard to San Diego for a day at Comic-Con. That hour of the day is problematic for me in the best of times, to wit:

8:05 a.m.: Panic sets in. This is followed by hope and despair, cycling through my brain in roughly two-minute intervals. This can be disconcerting.

8:15 a.m.: Within sight of the station. Hope springs eternal. Or for at least 90 seconds. I then, for the life of me, can't find parking.

8:25 a.m.: Finally find the entrance to the overnight parking, which happens to be around the back of the train station underneath an adjacent building with NO directional signs pointing that way.

And with that, I miss the train and settle for the next one which leaves 30 minutes late. Le sigh.

Every year for the past four, friends and frequent writing partners Jon Cryer and Richard Schenkman ("The Pompatus of Love," "The Man From Earth") take the train down to San Diego and spend the day at Comic Con International in San Diego. To be honest, I am not sure I would do it were I in Jon's position.

SDCC is massive. I have been to three Democratic National Conventions, and this is bigger. Not only that, it's jammed with fans in the middle of a multimedia feeding frenzy and here goes Jon, star of arguably the biggest scripted show on TV, striding into the throng.

To put it into perspective, imagine being in a crowd so thick that sometimes you can't move and when you can, it's very slowly. Add to that swords and axes and tails and cloaks and helmets and pointy ears and ... sweat. Well, you get the point.

The crowd at SDCC is almost too much to bear for me, and I'm just some schnook who types for a living.

Jon wasn't in "Star Wars," "Star Trek," "Harry Potter" or "Twilight" and is not part of the Wheedonverse.

While he was and to many will always be Duckie from "Pretty in Pink," his absence from these geek totems is probably what enables him to walk the floor at SDCC and only be stopped roughly 100 times in the four hours we hung out.

Try having a conversation with someone only to be interrupted every three minutes. To be honest, it kinda drove me nuts and just increased my sympathy for anyone in those afore mentioned franchises.

At one point, I asked Jon about the weirdest thing anyone's ever said to him and he couldn't remember specifics. He did mention that it's often something involving a mistaken identity. For a period of time he was routinely confused with Matthew Broderick, for example.

Usually people are polite, but I have noticed the slow increase of people taking pictures without asking first. Not cool. This ain't a zoo, people!

Bear in mind this is after several fans had shouted "Alan!" (his character's name on "Two and a Half Men") to get his attention and after the woman taking our lunch order had asked him where his "son" was (meaning "Men" co-star Angus T. Jones), momentarily making us wonder if she was asking after his real son.

"But," said Jon, "stuff like that happens all the time. Everyone does it. I've done it," recounting the tale of when he mistook one "Star Wars" franchise actor for another. The fact that they were both little people added a whole extra level of embarrassment to the story. My own gaff wherein I confused John Randolph ("Serpico") for Ralph Bellamy ("Trading Places") might be more highbrow but was certainly no less embarrassing.

And then there was that time in New York when someone yelled "Hey! I loved 'Sixteen Candles!' " as we were walking down the street. Well, no, but thanks for playing. Here's a lovely parting gift of "Get Your John Hughes Movies Straight."

Most of the time at SDCC was spent shuttling between the stands of the various dealers in original comic art, which Jon collects. These are the black and white pencil or ink drawings that the penciller would turn in to the editor and artist. There's only one. So if you buy the original cover pencil or inked art of the cover of Daredevil #158, for example, that's it. That's the only one. If you think about it, it's pretty cool

While a day at SDCC with Jon and Richard might not seem as glamorous or as exciting as riding in limos and going to gifting suites with (insert geek idol of the moment, here) as a friend, it's far more fulfilling.

I don't get to see Jon very often, and the three of us together is even more rare. After all, he's a busy guy, so to be able to spend four hours looking at comics, catching up and shooting the breeze, even in such an insane atmosphere, was the perfect afternoon.

OK, one gifting suite would have been nice.