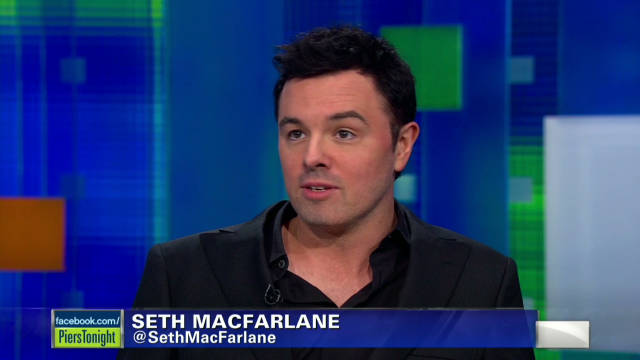 (CNN) -- "It was an angry call," Seth MacFarlane said of the now-infamous phone call in which Jon Stewart lambasted him for "Family Guy" poking fun at the fact that "The Daily Show" went live during the 2007 writers' strike, "and suffice it to say, he is a phenomenally good debater, if you had been keeping score, I would have lost roundly."

The creator of "Family Guy," "American Dad!" and "The Cleveland Show" is a guest on tonight's "Piers Morgan Tonight."

"I was really kind of in shock more than anything else," said MacFarlane. It was kind of an odd Hollywood moment. I was a huge fan of his show, and here I was getting this angry phone call."

MacFarlane told Morgan that he still maintains the standpoint that Stewart, "arguably the most popular, successful television personality in the genre," ought to have stood up for "the people who haven't made it yet."

He said that Stewart asked him who'd made him "the moral arbiter of Hollywood."

When Morgan pointed out the irony in Stewart calling out MacFarlane for mocking him, MacFarlane joked. "If I say yes, he's going to crucify me on his show every night for a year."

MacFarlane summed up the incident by telling Morgan that while he stands firm in his opinion that Stewart ought to have shut "The Daily Show" down during the strike, the "Family Guy" gag "was probably so over the line in its ruthlessness that it probably could have been more measured in its execution."

When Morgan asked where his darkly hilarious, absurd, slightly sinister brand of humor comes from, MacFarlane said "a lot of people in my family have very dark, very twisted senses of humor that I was exposed to at a very young age."

MacFarlane was very close to his mother, Ann Perry MacFarlane, whom he called "invaluable" to his comedy career, calling her sense of humor "wickedly vicious."

MacFarlane, who lost his mother to cancer last year, told Morgan "there was really nothing on 'Family Guy' or any of the other shows that could offend her," said MacFarlane.

When Morgan pointed out that "Family Guy" has poked fun at paraplegics, multiple religions, pedophiles, AIDS, and did an opera version of the Nicole Simpson murder, among many other controversial topics, Macfarlane maintained that his mother remained "unflappable," stating that "there was really nothing that fazed her" and that she herself had told her son stories about her past, "none of which I can repeat on the air, that shocked the hell out of me."

MacFarlane called the fact that he was never able to shock his mother the reason was such a valuable resource.

When it comes to what is and isn't off limits on his shows, MacFarlane told Morgan that he trusts his gut -- and the opinions of his team of writers, telling Morgan that they are "very smart, very conscientious people who are aware of what is funny and what is going to be over the line."

Citing "The Simpsons" as one of his influences, MacFarlane called prime-time animation a great forum for satirical humor, calling it the televised translation of politic cartoons found in "The New Yorker."

MacFarlane told Morgan "if we're wrong about something, we have a table read, where we read the script aloud for the network, for the studio, for each other, for the animators. And we get a lot of groans if something's over the line at that point. And if we make it past that point, there's always broadcast standards who, in Fox's case, are actually very reasonable people who genuinely care about the comedy as much as they care about not getting the network fined."

MacFarlane told Morgan that comedy is often an edgy, cutting, dark medium and that "Family Guy" doesn't veer away from poking fun, even at 9/11.

"It always has to be funny," he said. "If we're ever getting preachy or soapboxy then we're not really doing our jobs, and there have been times that we have gotten preachy and soapboxy, and that's us not really working as hard as we should."

MacFarlane himself had been booked on American Airlines Flight 11 from Boston to Los Angeles -- the plane that hit the North Tower of the World Trade Center on September 11, 2001. MacFarlane told Morgan that he'd given a lecture at his alma mater, Rhode Island School of Design, the night before and went out with some faculty members afterward and "had a few pints."

Due to the combination of being hung over and having been mistakenly told by his travel agent that the flight was set to takeoff 10 minutes later than it did, MacFarlane arrived just after the gate closed.

MacFarlane exchanged his ticket for a late-morning flight, dozed off in the lounge and woke up to the commotion surrounding the news that a plane had hit the North Tower of the World Trade Center. As the crowd gathered in the airport lounge watching the horror unfold, it was announced what flight it was.

"And I turned to the guy next to me, said MacFarlane. "And said, 'My God! That was the flight I was supposed to be on. I was late. I missed it.' "

MacFarlane recalled a "wonderful unity" among the people in the airport that morning "that we've since completely abandoned," recalling how the lounge bartender poured him a shot upon hearing that MacFarlane was supposed to have been on Flight 11.

"That feeling that must have been what, you know, our grandparents felt during World War II where, you know, this is -- in that moment, everything was -- we -- we're all the same," said MacFarlane.

MacFarlane did tell Morgan, "I'm not a fatalist," and admitted that the event, which was arguably a twist of fate for him, didn't shake him up the way it might others, because he habitually misses flights.

"A day before that incident, I could have been crossing the street five minutes earlier and gotten hit by a car and never known that I just missed it," he said.