Cover story: Where's the diversity at the Oscars? 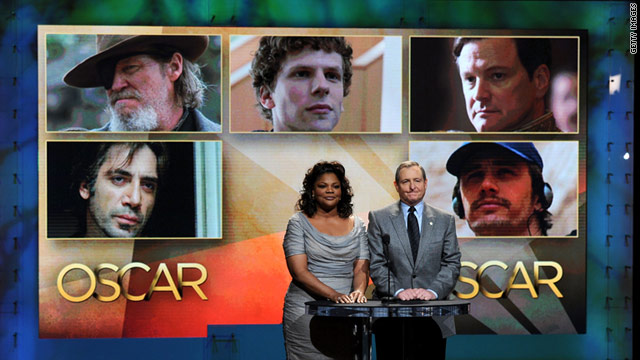 (CNN) -- After the Academy Awards ceremony in 2010, there was a great deal of hope that the glass ceiling had finally been shattered in Hollywood.

"The Kathryn Bigelow" effect was coined by some industry observers who believed that her win for "The Hurt Locker," the first Oscar for a woman director, would open doors of opportunity for females behind the camera. The riveting film "Precious" yielded a best supporting actress win for African-American performer Mo'Nique, and the first ever statuette for an African-American screenwriter in the best adapted screenplay category went to Geoffrey Fletcher.

But that was last year.

This year there was a decided dearth of diversity in the Oscar nominations. There are no women or people of color among the director nominees, and the acting nominees are all white. Javier Bardem, who is up for best actor for his role in "Biutiful,' is a Spaniard and therefore European.

Which raises the question: Why in an era of ever increasing diversity among movie audiences is that not being reflected among the nominees for Hollywood's most prestigious award? Where are the diverse faces both in front of and behind the cameras?

It's a complex issue that involves both supply and demand.

More focus has been put on actors of color and women this year because of their stellar performances last year. African-Americans snagged nine nominations last year and, in addition to Mo'Nique and Fletcher, Roger Ross Williams won the award for best documentary (short subject) for "Music by Prudence."

But historically far fewer meaty dramatic roles, which are beloved by the academy, have been written for or awarded to actors of color, and women behind the camera are greatly outnumbered by men.

"The stories that we would really like to tell usually don't get greenlit," said Rocky Seker, a former creative developer for a director with Sony Pictures and now a film curator who runs Invisible Woman ... Black Cinema at Large. "We're just not taken seriously. It's all a moneymaking issue."

Both groups also find it difficult to break into the big-budget Hollywood films that garner the attention to carry the momentum needed for nominations. Seker said she often comes across wonderfully made black independent films that just aren't able to get big-studio backing or distribution deals.

While Debra Granik and Lisa Cholodenko have both received critical acclaim for their turns as directors of "Winter's Bone" and "The Kids Are All Right," respectively, their films did not enjoy the same media attention as "Black Swan" or "The Social Network," whose male directors were nominated. (Granik and Cholodenko both were nominated for their screenwriting efforts.)

Cathy Schulman is a producer of the Oscar-winning film "Crash" and president of Women In Film, a nonprofit dedicated to advancing sexual equality in filmmaking. She said that when there are 10 nominations for best film, but only five director nominees, invariably it means someone will be slighted.

"On the one hand, I am very encouraged to see that there are women sprinkled throughout most of the categories, with the continued strength as we've seen before in art direction, in music and in other areas that we have consistently seen a strength in," Schulman said. "What does disappoint is the lack of women in the writer, director, producer roles and some of the other key departments like cinematography and editorial, though there is one woman, Pamela Martin, who has been nominated for editorial (for "The Fighter") and that is certainly well-deserved."

Martha Lauzen, executive director of the Center for the Study of Women in Television and Film at San Diego State University, said, "There are lots of reasons at both the individual level as well as the industry level that converge to suppress diversity both on the screen and behind the scenes."

Lauzen added, "The film industry does not exist in a vacuum; it is part of a larger culture, and our attitudes about gender and race are extremely deeply held. Those attitudes don't change overnight or with an Oscar win."

Lauzen is set to release a study next week that will show the numbers on women have not changed significantly from her most recent survey, "The Celluloid Ceiling: Behind-the-Scenes Employment of Women in the Top 250 Films of 2009."

Schulman, the Women In Film president, said Tuesday's nominations -- or lack there of -- merely strengthened her resolve that there is much work to be done.

"Where I see this lack, it really solidifies my belief that we need to focus on getting women in at the ground level in these disciplines and getting them embraced and trained so that they can hone their skills to be included in this grouping and to stop this unfortunate lack in these top jobs on movies," she said.

For African-Americans, it's a matter of timing and a more systemic issue, said Gregg Kilday, film editor for The Hollywood Reporter.

"As we look at the movies this year, there really weren't movies in contention from African-American filmmakers," said Kilday, whose publication wrote a piece in September called "Whitest Oscars in 10 Years?" "It's not the academy's fault. It speaks to a larger issue in the industry in that it is still difficult for black filmmakers to do movies about black film matter."

Kilday said that while Tyler Perry's film "For Colored Girls" boasted an all-female, African-American cast, it opened to mixed reviews and never gained much traction as an Oscar contender. Likewise, while actress Halle Berry has been critically acclaimed for her portrayal as a stripper with multiple personality disorder in "Frankie & Alice," Kilday said that movie enjoyed a one-week limited release just to make it eligible for this year's awards season and there was little promotion behind it.

Kilday said the movies favored by the academy also factor in the lack of diversity.

"When you talk about academy movies, they have to be a specific type," he said. "A kind of mainstream commercial movie like a commercial comedy is never going to show up on the academy list. While I think the industry is pretty open on casting, it's not that open on making serious movies in general, and serious African-American movies are probably even harder to get financed."

Yu said that because there are really no proven, bankable Asian actors he has little expectation of roles that might attract the academy going to Asian actors. He said this year he was also not surprised by the decided overall lack of diversity because there was no early buzz about any actors of color as potential nominees.

"Movies are a business," Yu said. "Consequently studios are as risk-averse as it gets, and they want to go with something tried and true."

Ava DuVernay is founder of the African-American Film Festival Releasing Movement -- a collective of black film festivals -- and the writer-director of the independent film "I Will Follow." DuVernay said the nominations ironically come at a time when she has jokingly been calling the Sundance Film Festival "Blackdance" because of its abundance of minority films this year.

"The Academy Awards represents what is being distributed and exhibited year-round," she said. "It's challenging when people expect to have this onslaught of diverse nominations when it hasn't been a diverse year."

DuVernay said films such as "Precious" and directors such as Bigelow are anomalies and that the nominations over the past few years have not been incredibly diverse. The atmosphere in the industry has not changed just because there are a few breakthroughs here and there, she said.

"Ultimately, if we have people that are serious about diversifying films, whether it be black films, women's films, LGBT (lesbian, gay, bisexual, and transgender) films or Latino films, they have to be building those structures year-round," DuVernay said. "Then that becomes a conversation where there were these amazing black films, Latino films, LGBT films and films made and directed by women that were ignored."

He is the chief executive officer of Film Life and founder of the American Black Film Festival, which celebrates its 15 anniversary this year as a showcase for black film. While not an academy member, Friday said that if he were picking nominees his list would be similar to those announced Tuesday because there were so few films with people of color in principal roles or behind the scenes of movies that would be considered.

"We have to challenge the studio system," Friday said. "Why are studios not making films that represent the people of this country?"