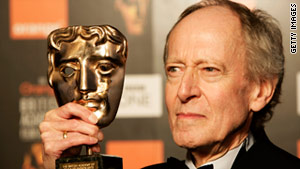 Composer John Barry wrote the theme for 11 James Bond movies and won an Oscar for "Dances with Wolves" in 1990.
STORY HIGHLIGHTS

(CNN) -- Film composer John Barry has died after an award-winning career spent writing the score for many movies, including 11 James Bond films, a friend said.

He also wrote the theme songs to 11 James Bond movies, according to United Agents, the agency that represented him.

"There was something elegantly effortless about the way John created seemingly simple tunes that were in fact very complex," said David Arnold, a friend and fellow Bond composer. "The fact that these tunes went straight to your heart is just more evidence of the man's genius."