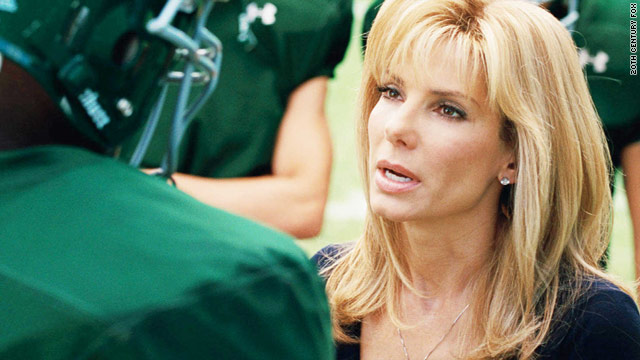 (The Frisky) -- By T-minus 18 days until the Oscars and, of course, we are all starting to place bets on who we think will walk away with little golden men this year. Luckily, the Academy has proven itself to be pretty darn predictable over the years. If you're America's Sweetheart, you'll probably win Best Actress. If you sing in a flick, you are almost guaranteed Oscar gold. But there's another trend we've been noticing lately: the winners for Best Actress and Best Actor tend to be the person who's taken on the based-on-a-true-story role. In fact, 10 of the 20 top honors given in the 2000s went to actors who portrayed real people. Let's take a look, shall we?

Last year, Sandra Bullock won Best Actress -- just days after taking home a Razzie -- for playing Leigh Anne Tuohy, the Southern mom who took in Michael Oher and helped coach him toward football greatness. The real Leigh Anne was in the theater to see Sandra accept her award.

In 2008, Sean Penn won the Academy Award for Best Actor -- again! -- for playing Harvey Milk, the first openly gay man to be elected to public office in California.

I still remember the gorgeous mermaid-scale gown that Marion Cotillard won when she accepted the Oscar for Best Actress in 2007 for her role in "La Vie En Rose." In the movie, she played Edith Piaf, an extremely popular singer in France who was also known for her out-of-control social life. In many ways, Marion won for playing the Britney Spears of 1950s France.

The Frisky: 12 Starlets Married And Divorced By 26

In 2006's "The Queen," Helen managed to out-Elizabeth Queen Elizabeth II herself in the movie about the aftermath of Princess Diana's death. Helen, of course, won Oscar gold for her efforts.

Philip Seymour Hoffman was one of two actors to portray writer Truman Capote in a two-year span. His uncanny portrayal netted him a Best Actor win in 2005.

The Frisky: 10 Celebs Who Fancy Themselves Doctors

That same year, Reese Witherspoon won Best Actress for playing another beloved real character -- June Carter Cash, the wife of Johnny Cash. In the movie, Reese didn't sound exactly like June as she warbled "Jackson," but put her own spin on the classic tune.

Blame it on the al-al-al-alcohol, but sometimes I forget that Jamie Foxx is an Oscar winner. He won Best Actor in 2004 for his portrayal of iconic ivory-tickler Ray Charles in "Ray."

The Frisky: Scandalous 9 Celebrity Pairs Spotted Leaving A Party Together

Charlize Theron broke out of the former-model mold when she played Aileen Wuornos, a prostitute who killed at least six men. By gaining 30 pounds, rocking a mullet, and perfecting an eyebrow-less, terrifying stare, Charlize won Best Actress in 2003.

Adrien Brody may be in beer ads now, but in 2003 he was riding high after winning the Oscar for Best Actor in "The Pianist." In the movie, he played Jewish piano virtuoso Szpilman, who survived the Nazi invasion of Poland.

In 2000, Julia Roberts took on the role of a brash single mother who, without a law degree, helped construct a lawsuit against Pacific Gas and Electric Company. She won an Oscar for her real-life role in "Erin Brockovich." The real Erin, however, did not get a statue for her cameo in the flick as a waitress who takes Julia's order.

The Frisky: 10 Reasons Why We Need The "Arrested Development" Movie To Happen

So who will the real character effect benefit this year? Interestingly, none of the nominees for Best Actress played screen versions of actual people. But this will make for a very tight race for Best Actor, with Jesse Eisenberg portraying Facebook creator Mark Zuckererg in "The Social Network," Colin Firth playing a stuttering King George VI in "The King's Speech," and James Franco as Aron Ralston, a mountain climber who has to hack off his own arm in "127 Hours." Which of them do you think will win?