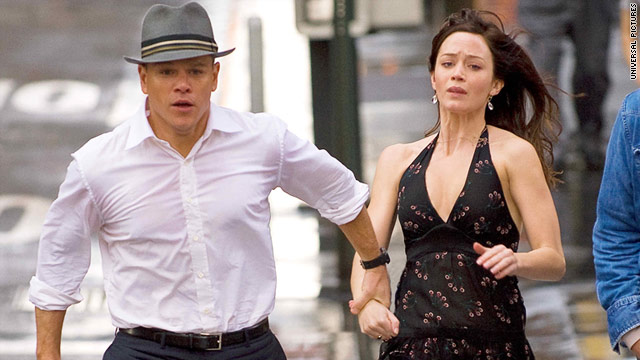 Matt Damon and Emily Blunt make a run for it in "The Adjustment Bureau."
STORY HIGHLIGHTS

(CNN) -- Are angels prone to human error? So it seems, though the man upstairs also bears some responsibility for overwriting his own grand plans in "The Adjustment Bureau," a sci-fi romance that plays like an extended episode of "The Twilight Zone."

That's intended as a compliment. Rod Serling's classic show was often glib and sometimes sentimental, but it also played on ideas: philosophy, paradox, even politics. This was cerebral sci-fi for mass consumption, before special effects and spectacle took over. Not that these things are incompatible -- just don't expect many visual pyrotechnics here.

George Nolfi's film (he's writer-director-producer) musters a chase scene or two, but they're on foot, and it's almost comically lo-fi -- as retro as the unfortunate trilby hat Matt Damon sports in the climax. He is David Norris, a young up-and-coming New York politician whose Senate hopes take a dive when certain frat-boy antics from his recent past come out in the press.

A chance encounter with an outspoken dancer Elise (Emily Blunt) hiding in the men's room inspires him to veer off-message in his capitulation speech, which goes over so well with the voters it puts his career right back on track.

Matt Damon: 'I love my life'

That's when the angels are caught napping. David bumps into Elise on the bus to work -- he was meant to miss it -- and they realize they're made for each other. But they're not, and the members of the Adjustment Bureau reluctantly take David into their confidence and convince him it was all in error. His future is at stake, and so is everyone else's.

Like "Minority Report" and "Total Recall," the inspiration is a Philip K. Dick short story, "The Adjustment Team," though the film has as much in common with "A Matter of Life and Death" or "Wings of Desire."

Still, the adjusters themselves hark back to 1954, when Dick wrote his story: With their flannel suits, hats and clipboards, these angels are quintessential 1950s bean counters and bureaucrats. Nolfi casts John Slattery from "Mad Men" as celestial middle-management, desperately trying to cover up the slip before the big boss gets wind of it.

The advertising pretends the film is an enquiry into fate vs. free will (there's a hard sell!), but the movie is not so clear-cut, or even coherent, on that point. More interesting is the fiendish quandary trouble-shooter Terence Stamp poses for Norris: If he keeps seeing Elise, he tells him, not only will his career come to nothing, it will also mean the end of her dreams. Is he such an egoist that he thinks he's worth it?

Nolfi doesn't resolve any of this in a convincing fashion, but the movie chugs along at a pleasant clip and it has some neat touches -- like the freeze-frame David inadvertently walks into when the adjusters are sweeping his office. More importantly, it also has a pulse. That's almost entirely due to the palpable chemistry between Matt Damon and Emily Blunt.

She may not have the physique of the world's next great dancer, but Blunt's vivacity and unpredictable, mischievous rhythms show us why David would fall in love at first blush, and even suggest why he might be willing to give up the world for her.

Now, if Damon had given us any reason to suspect his ego might be bigger than his heart, "The Adjustment Bureau" might have come off as something edgier and more arresting than "Inception"-lite. Something worthy of Philip K. Dick, even. But that was never on the cards, and "Inception"-lite isn't so bad. You might even prefer it this way.