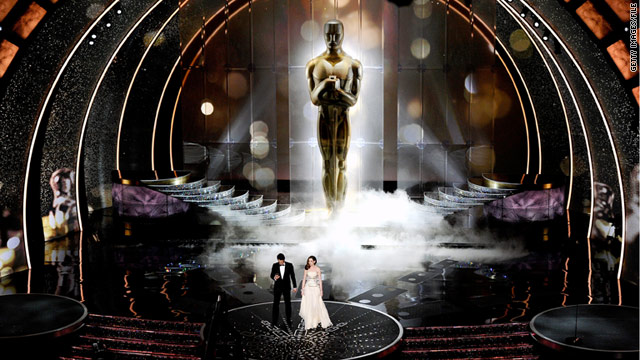 As of the 83rd Academy Awards, hosted by Anne Hathaway and James Franco, there is no category for stunt coordinators.
STORY HIGHLIGHTS
RELATED TOPICS

Los Angeles (CNN) -- While Oscars go to those who do makeup, design costumes and mix sound for movies, those who crash cars, fall from tall buildings and blow things up can't get an Academy Award.

Stunt coordinator Jack Gill has broken his back twice and his neck once during his 32-year career. He's hit a brick wall for the past 20 years trying to convince the Academy of Motion Picture Arts and Sciences to honor his profession.

"I think it's the acknowledgement that we all want for our efforts, because we are a big part of the movie-making industry and we see all of our other department heads getting these Oscars," Gill said Friday.

An Academy committee meets on June 14 to again decide if a new Oscar category will be created for best stunt coordinator in a movie, which GoldDerby.com editor Tom O'Neil says is "one of many areas the Oscars overlook and shouldn't."

When the Academy governors voted five years ago against a stunt Oscar, it appeared that the development of computer-generated imagery (CGI) would reduce demand for live stunt performers in movie production, Gill said.

"But in reality, the stunt person has evolved into a different type of stunt person," he said. "He is now an integral part of the CGI aspect of it and we employ as many stunt people now as we did in the past."

This year's blockbuster "Fast Five" was noteworthy for its real stunts, said Gill, who worked on the action film as a stunt coordinator.

"We're going back to real physical stunts because the audience can now tell the difference and once an audience member can tell the difference between what's real and what's fake, it takes him out of the element and he doesn't believe that he's part of that action scene," he said.

Gill, who started his career jumping ditches with the "General Lee" on TV's "Dukes of Hazard," said the stunt business is getting more dangerous, not less.

"They want bigger and better," he said. "They want to push the envelope. They want to get to a point to do things that nobody's ever seen before."

"Fast Five" required Gill to figure out how to pull a 10-ton bank vault with two cars.

"You're always doing things that tax your ability and you have to try to get in there and figure it all out and that's what a stunt coordinator does," he said.

Even movies without crashes, blasts and falls need stunt coordinators to "keep actors safe and to make sure that all the action works," he said.

"Avatar," which was completely computer-generated, had a stunt coordinator "who designed all the action," Gill said.

While quite a few of the leading actors do their own stunts, it is the stunt coordinator who must decide which stunts they can and can't do, he said.

"Because, as you know, if the actor gets hurt in any way, say he even breaks a finger, you're shut down for three months, and they look at you and say 'Why did you stick him in something where he can get hurt?' "

"They're the ones that have to tell them, 'When you stand in this spot right now your life is in my hands and I'm telling you that you're safe in this spot, when the cars come sliding around the corner, they are not going to hit you. If you stand five feet over here, it's going to kill you,'" Gill said.

Despite the support of Hollywood A-listers such as Steven Spielberg, James Cameron, Arnold Schwarzenegger, Martin Scorsese, Jessica Lange and others, the politics are against the campaign for adding an Academy Award for best stunt coordinator, according to O'Neil, a journalist who has closely covered the issue.

Pressure to keep the annual Oscar telecast entertaining and on schedule means there is a "zero chance" a best stunt Oscar will be handed out in the live ceremony, O'Neil predicted. Gill suggested, though, the clips of the nominated stunts would liven up the telecast.

"We don't even care if we're in the ceremony," Gill said. "We just want to get that Oscar in our hands."

But the governors who represent the makeup, animated shorts and sound mixing peer groups would be unlikely to vote for awarding a competitive Oscar category off-air, O'Neil said. It would create a precedent that could pave the way for their Oscars to be taken out of the telecast's limelight, he said.

"It's the embedded and entrenched politics of this ancient group that is so hard to move," O'Neil said.

The basic problem is that it would require addition of a stunt coordinators peer group to the 16 already existing, he said. It would add three governors to the Academy's board, which with nearly 50 now is "just a nightmare," he said.

There is "very little payback" for the Academy to add a stunt coordinator Oscar because "these are unknown people to the viewers at home that watch the show, he said.

Stunt people are not the only overlooked movie workers, O'Neil said.

Voice actors don't have "a shot in hell" of winning a Oscar for their performances in blockbuster animated films, he said. Casting directors should also be honored, he said.

Stunt actors are not completely snubbed by industry award shows, though. The Screen Actors Guild added a "stunt ensemble" SAG award. O'Neil said the category has been "warmly received."

Gill, who was recently set on fire for an episode of TV's "True Blood," said he's hoping the Academy governors will also see the light and see that "without a stunt coordinator most of these big films would never be made."

"I worked very hard on 'Fast Five' trying to make those physical stunts look real, and I think it paid off in what the audience came and saw, and I'd really like to be a part of the Oscar ceremony next year," he said.