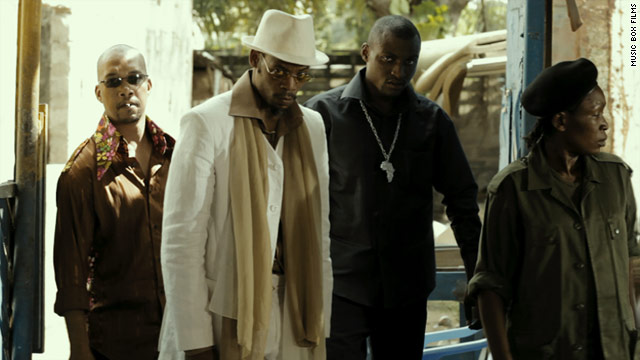 It's the first movie produced in The Democratic Republic of the Congo (DRC) for over 20 years and it's thrusting the central African nation into the spotlight for all the right reasons.

But not only is the feature film "Viva Riva" a milestone for the DRC, it's also won the newly created MTV award for Best African Movie, as well as a string of other awards at festivals from Berlin to Toronto.

The fast-paced crime story is set in the capital city of Kinshasa. It follows the adventures of a charming gangster, Riva, who's trying to make a living selling black-market gasoline and ends up falling for the local crime boss's girlfriend.

For one of the actors it was also a chance to return to Africa after fleeing civil war in neighboring Angola.

"It was special," said actor Hoji Fortuna. "It was very, very, very special. I, for the longest time, had issues about going back to Africa.

Fortuna left Angola in 1994 after being shaken by its conflict and the death of his mother. He moved to Portugal aged 20, and then to New York, where he landed the role of Cesar in Viva Riva, a smartly dressed foreigner who is also trying to make money in the capital's lawless streets..

Writer and director Djo Munga chose the plot line after meeting traders near the DRC/Angolan border who would go to great lengths to make money in the economically damaged country.

Critics have described the film as "gritty" and "real" and Fortuna says it really manages to capture the spirit of Kinshasa.

Fortuna's role won him best supporting actor at the African Movie Academy Awards -- the "African Oscars" -- but he didn't always know he wanted to go into acting. Originally studying law at a university in Portugal he got his first chance to tread the boards at the age of 26 in an amateur college play.

He said: "The culture where I come from always goes in the sense where a guy has to take a more serious kind of professional approach.

"You have to either become a lawyer, or an engineer, or a doctor or something like that. Becoming an artist or a musician or an actor wasn't really an option."

Those behind the film hope its success will now spark a revival among the local movie business caught up in years of conflict and unrest.

"I think we are actually making history here," Fortuna said. "We have broken kind of the walls and allowing our films to be accessible to a wider audience."

"You know, the fact that the movie was picked up and distributed in the United States and most of the countries of the world are already a result of that. So, I think it can only bring good things for African cinema," he added.

For Fortuna, the film has also allowed him to return to Africa, and make peace with his home country.

"Viva Riva was actually the opportunity to do it," he said. "I am grateful that it happened that way; I felt that I was doing the right thing. You know, I felt like this is what I wanted to do."

Emily Wither contributed to this report