Can 'Attack the Block' conquer the U.S.? 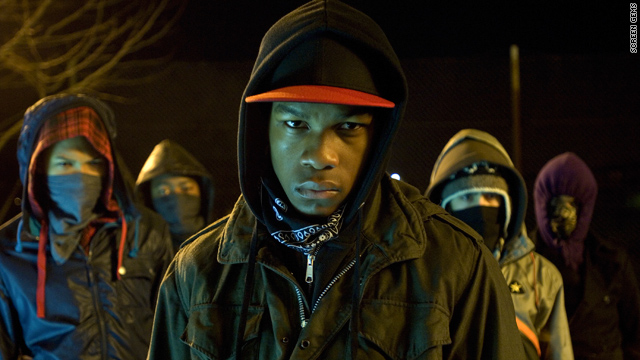 John Boyega and the cast of "Attack the Block" face off against aliens in South London.
STORY HIGHLIGHTS

(CNN) -- Little did Joe Cornish know that the night he was mugged would turn out to be a turning point in his career.

That moment would stick in the first-time director's head when he wrote a screenplay, also inspired by science fiction films he loved such as "Close Encounters of the Third Kind" and "E.T. The Extra-Terrestrial."

Noticing that these sorts of films always took place in American suburbia, he wanted to tell the story of what would happen if teenagers on "the block" in London, like those muggers, had to defend their neighborhood from invading aliens.

"The idea rattled around in my head for a long time, then I put pen to paper four years ago," he said.

Cornish, best known in the United Kingdom for co-hosting the sketch comedy series, "The Adam and Joe Show," had connections at Big Talk Productions, the English production company behind "Shaun of the Dead" and "Scott Pilgrim vs. the World," who were able to get the money together for it.

"The movie was made for about what I imagine it would cost to make one alien in other movies," said Cornish. "We used digital effects to take away detail --- others are using CG to add detail, to make it stylized and abstract."

Cornish admires lower budget films such as "The Terminator" and Steven Spielberg's "Duel."

"I love movies where directors a bit too ambitious. Sometimes, it results in something more truthful-feeling than another blockbuster."

The aliens, with their beastly qualities and glow-in-the-dark teeth, look very different from the massive CGI creatures we're used to seeing, as well.

In this case, with the relatively low budget they had, necessity was the mother of invention.

"We used a really lo-fi minimal CG technique -- I was keen to have something for the kids to respond to. Hopefully our creature is unlike anything you've seen before."

The kids fighting off these creatures, like the director, were almost entirely first-time film actors, including the star, John Boyega.

"We saw about 1,500 kids, and we really put them through their paces. We really tested them to make sure they were committed and had support at home and they had the stamina to last the shoot," he said. "There was a lot of shooting at night, with hard work and stunts, we had to be sure they could stick with it. We found some amazing talent."

Before its UK release in May, "Attack the Block" was screened at the South by Southwest festival in Austin, Texas, and the movie soon gained a U.S. distributor in Screen Gems. Since then, it's been screened around the country, with buzz building up online. (Quite extraordinary for a movie where most of the characters speak in thick South London accents.)

"We always dreamed it would go international," he said. "After all, it is very inspired by American directors I admire. We always hoped American audiences would respond to it, but it's very British, a very authored piece, and not designed to be super-commercial. So I'm very excited and happy that audiences have responded so far. Fingers crossed."

As for Cornish's next project, he's mum about what it will be, but says it will be different from "Attack the Block."

The film opens in Los Angeles, New York, Toronto, San Francisco, Seattle, Austin and Chicago on Friday (the same day as a certain other alien movie) and will be in wide release in August.