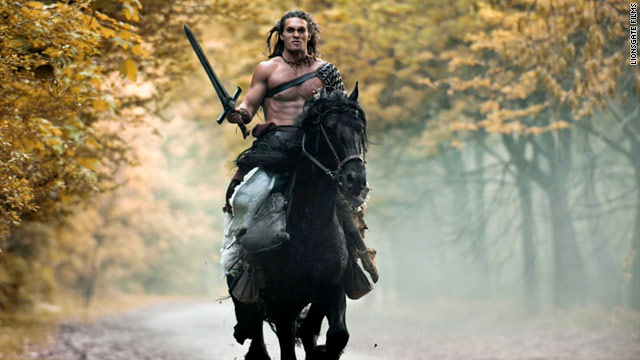 (CNN) -- Robert E. Howard's pulp warrior gets a new face in the form of "Baywatch" and "Game of Thrones" graduate Jason Momoa in the new "Conan the Barbarian."

This loud and proudly primitive R-rated movie is definitely not for the squeamish.

In the opening sequence, baby Conan is carved out of his mortally wounded mother's womb by his father's blade as a battle rages all around them. Before he's reached puberty the young whippersnapper is collecting his enemies' heads the way other boys collect baseball cards. For a while there you might think that "Conan the Psychopath" would be a more appropriate moniker.

To be fair, there's not much point in doing a Conan movie if you're going to pull your punches. Bear that in mind as our hero shoves his thumb in the gaping hole where one adversary's nose used to be and squeezes, or when he ties another minion to a catapult and sends him flying back to his master, the shadow lord Khalar Zym ("Avatar" heavy Stephen Lang). The sadism is unpleasant, but you get what you pay for.

Director Marcus Nispel has a well-earned reputation as a remake specialist with a knack for clobbering the life out of the source material (his versions of "The Texas Chainsaw Massacre," "Pathfinder" and "Friday the 13th" are all inferior to the originals).

But "Conan the Barbarian" has little in common with its namesake, the self-consciously mythic 1982 movie penned by John Milius and Oliver Stone, and taken on its own terms -- as a kind of Ultimate Fighting Dark Age fantasy -- it has a certain sledgehammer pragmatism.

Momoa is at least as competent an actor as Arnold Schwarzenegger was when he first played the part in the early 1980s, and he looks like he could punch out a horse. But no matter how hard he glowers or how many heads he breaks, he's not half the barbarian Arnie was.

When Schwarzenegger spoke, you had to pick through a dense thicket of umlauts. He was a natural born Teuton.

Momoa has a rich, dark honey of a voice that sounds like swaying palm trees and cool vibes. Even when he's shutting down his monk girlfriend's angst-y philosophizing with a curt "I live, I love, I slay -- I am content" (easily the movie's most memorable line), he can't quite disguise that empathetic laid back Jack Johnson surfer dude underneath. Or maybe it's just the sarong he wears around his waist.

In the fashion stakes Momoa is easily upstaged by Rose McGowan's Valley Girl witch, teetering uncertainly on stacked rubber heels in a succession of cut-off "I Dream of Jeannie" outfits. She's dressed for "The Arabian Nights," but the film was shot in Romania. Have they heard of hypothermia in Hyboria?

The story? There isn't much: Conan dedicates his life to tracking down the man who turned his father into a lava lamp (and foolishly let the son live). That would be Khalar Zym, of course, whose lackeys see to it that our barbarian always has his hands full.

With its pointless 3-D, a prologue narrated by (who else?) Morgan Freeman, thudding direction and horrible acting, "Conan" doesn't have a lot going for it -- only sheer bloody-mindedness and another gory battle every three minutes.