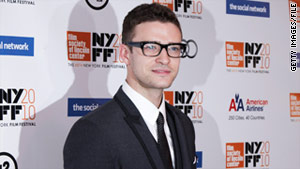 Justin Timberlake "has no involvement" with a song that some media credited to him last week, his representative says.
STORY HIGHLIGHTS

Los Angeles (CNN) -- Justin Timberlake has brought "sexy" back time and again, but contrary to recent reports, he has yet to bring new music to the masses.

The former Mouseketeer turned movie star, whose last album was 2006's "FutureSex/LoveSounds," said repeatedly in 2010 that he was in no rush to get back into the recording studio.

But last week, some media credited a song called "Take You Down" to Timberlake, reporting that the track was "leaked" online.

Sonia Muckle, a representative for Timberlake, said such reports are not true.

"The song is the work of a Danish artist named Rasmus Thude," Muckle said Monday.

"Justin's representatives were not initially contacted to fact check the validity of these reports or if the song was, in fact, his. Justin has no involvement with either the song or the artist but wants to assure his fans that when he releases new music, they will be the first to know."

The 29-year-old singer and actor starred in "The Social Network" last year. He has had a string of hits, including "Cry Me a River" and "SexyBack."