The return of the Strokes: Inside their fourth album 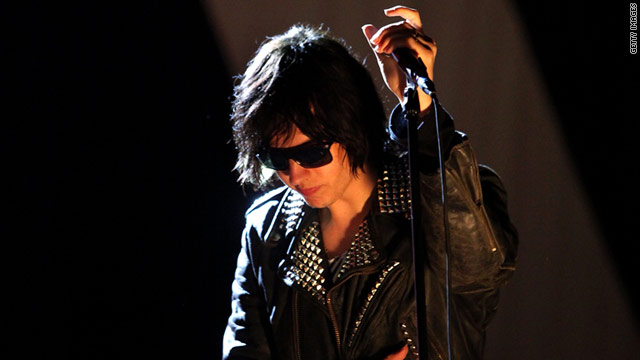 (Rollingstone.com) -- The Strokes' new record is finally done, after nearly two years of work that included scrapping one set of sessions done with a producer, then remaking virtually the whole album on their own. Tentatively called "Angles," the New York band's first album since 2006 will be released by RCA on March 22nd. "It's what the record sounds like," guitarist Albert Hammond Jr. says of the title. "It comes from five different people."

Hammond is referring to the fact that the 10 new songs were all written, in various combinations, by everyone in the band: a first for a Strokes album. Their breakthrough debut, 2001's "Is This It," and the 2003 follow-up, "Room on Fire," were largely written by singer Julian Casablancas. "The vision was everyone's -- we all contributed ideas -- but the genesis of the songs was his," admits guitarist Nick Valensi. "This is the first one where we are truly working democratically. It's taken a long time because this is a new model for us."

This article appears in the February 3, 2011 issue of Rolling Stone. The issue will appear on newsstands and in the online archive January 21.

"Taken for a Fool," "Life Is Simple" and the probable first single, "Undercover of Darkness," are reassuring displays of the Strokes' feral-garage dynamics. But "Angles" is the best album the Strokes have made since "Is This It" because of the stylistic depth and progressive excitement in those crisscross guitars, the tightly wound rhythms and Casablancas' dry trademark croon. The stabbing guitars in "Machu Picchu" mimic the staccato beep of synthesizers, then become a rough wall of jangle over a hip-hop grind, as if the Strokes are cutting a Jay-Z track via the Rolling Stones' "Aftermath."

"Radio Minor Madness" has even more electronics, laced with ill-tempered guitars and startling high leaps in Casablancas' vocal. And "Call Me Back" is striking ballad suspense, disrupted by a psychedelic-seizure bridge. "That's one of the main reasons it's so hard for us to record, to capture what we do," Hammond says. "We don't leave a lot of room. There is always someone doing something."

The bigger problem on the way to "Angles" was getting everyone in one room to do anything. After they finished touring behind 2006's "First Impressions of Earth," the Strokes splintered into a series of solo albums and side projects. "This band is like a house of cards -- when one thing falls, the whole thing collapses," says Valensi, the only member who didn't release his own record. "It's just typical rock-band bulls---, the clichés that keep a group of people who have something special from wanting to continue it."

Valensi, Hammond, Casablancas, bassist Nikolai Fraiture and drummer Fabrizio Moretti reconvened to write and arrange new material in early 2009. "It was like we were starting from scratch," says Hammond, "but with a lot of history. It's confusing to do that."

After making live demos of 18 songs, the Strokes started recording with producer Joe Chiccarelli at Avatar Studios in New York. "Life Is Simple" is the only song on "Angles" from those sessions. "He was trying to do as little editing as possible," Valensi says, "to the point where we were at take 70 of a song. It felt so strict." The Strokes took the tapes to Hammond's home studio upstate and ultimately redid the other nine songs, top to bottom.

The Strokes will tour this year -- within reason, Hammond claims: "We want to come back strong but slowly, so we can grow live and also make new music. We want to release albums quicker."

"I don't want to make an album every five years," Valensi insists. "I love being in this band, and I want it to be a career thing. It's so worth it -- for all of us."