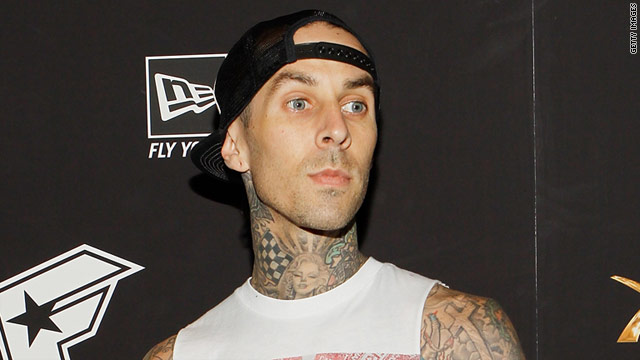 Travis Barker has a full agenda for 2011, beginning with his debut solo album and a tour with Lil Wayne.
STORY HIGHLIGHTS
RELATED TOPICS

(RollingStone.com) -- Travis Barker has a full agenda for 2011, beginning with his debut solo album (out on March 15) and a tour with Lil Wayne, plus plans to finish the long-delayed Blink-182 reunion album for release later this year.

But it hasn't come easy for the drummer, who was barely two songs into the making of his new "Give the Drummer Some" album when he was seriously injured in a 2008 small plane crash. Barker and his friend DJ AM were the only survivors.

"Honestly, I never thought the album would be finished," Barker tells Rolling Stone. "For a while after my accident, I was just recovering. No one really thought I would be able to play drums after all the surgeries and everything. That was always on my mind. Once I was in the studio, it was like, 'I can walk now, I can play the drums still. I have to finish this.'"

His recovery from the crash took longer and was more painful than was publicly known at the time. Barker went through 16 surgeries and nearly had a foot amputated. For a time, his left hand was completely numb. "It was sketchy, so I came a long way. And mentally I was a basket case," he says. "It was a big amount of time to get off of 20 medications that they had me on, and then physically getting in shape. It was heavy."

Barker was on tour in 2009 with the reunited Blink-182 when the call came that DJ AM had overdosed in New York. "It was hard for me to even get in the bus and be moving around. Me and AM would always speak. We were a support system for each other for a year after the crash."

Hottest Live Photos of the Week

After the Blink-182 tour, Barker spent much of the last year completing tracks for "Give the Drummer Some," with cameos by the likes of Ludacris, Lil Wayne, Snoop Dogg, Slash and Kid Cudi. The sound isn't punk. Instead, it's brooding hip-hop propelled by real drumbeats.

Slash unfurls a fiery Santana impression on the Latin-flavored "Saturday Night," while Tom Morello rages on guitar through a storm of scratching and thundering beats on "Carry It," with vocals from RZA and Raekwon.

"When I look at music everything is blurred, and I like it that way," Barker says of his genre mixing. "I grew up like that, hanging out with different types of people who listened to so many different types of music. I never wanted to be part of any one clique. I loved it all."

Blink-182 began work on a new album in late 2009, but for most of the last year the band had other things to do. "It seems like forever," Barker says with a laugh. The band is now scheduled to deliver the album in June. "This year has been the most active Blink year. We're locking ourselves in a studio. I was in there last night."

Barker will be on the road in March and April with Wayne and Rick Ross for the "I Am Still Music Tour." (Mixmaster Mike of the Beastie Boys and a rotating lineup of guest vocalists will join them.) He'll then produce three songs with an unsigned artist for the "Guitar Center Presents Your Next Album With Travis Barker" competition. And the drummer expects to record again as the Transplants with Rancid's Tim Armstrong. Keeping busy is important, he explains. "Playing my drums is therapy."