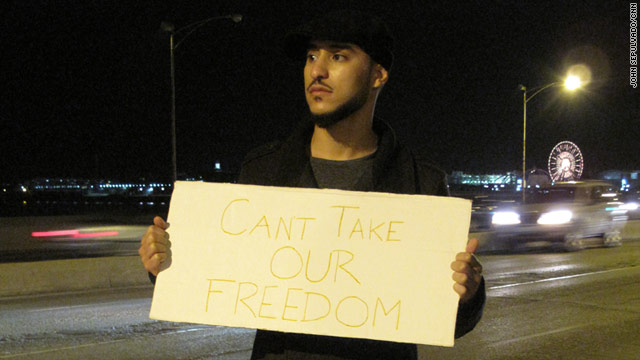 Chicago (CNN) -- On an unusually warm Chicago night, Khaled Ahmed sits on a stoop outside the towering John Hancock building in downtown, talking about his childhood.

The way Ahmed tells it, he may have been a bit of a knucklehead growing up in Lexington, Kentucky. As teenage boys sometimes do, especially when bored, Ahmed threw eggs at houses, played pranks on neighbors, and would ditch school occasionally.

He rooted for the University of Kentucky Wildcats, rode his bike around town, and listened to Lauryn Hill, Tupac Shakur and Nas.

"Yeah, it was a pretty normal childhood, for the most part," Ahmed says. "Except I grew up wanting to assassinate (Libyan leader Moammar) Gadhafi."

Ahmed, a 26-year-old U.S.-born Libyan-American, is better known as the rapper Khaled M. His father, Mohamed Ahmed, and mother, Wafa Nashnoush, spent most of their lives protesting the Gadhafi regime. Now, Khaled M. is doing the same in the song "Can't Take Our Freedom."

In one verse, Khaled M. raps about the Libyan dictator: "Won't take you half an hour to figure that this coward can only get his power through violent means/ Killing all the doctors in the hospital/ When the regime just seems so unstoppable/ When freedom feels like its impossible/ The people rise and overcome every obstacle!"

Ahmed grew up in Lexington's Libyan community. His father was a Libyan political prisoner from 1972 to 1977, after leading student groups against Gadhafi. Mohamed Ahmed was able to escape prison, flee Libya and lead opposition groups from abroad. But after three years of running, the family decided to raise Khaled and his two brothers in one town. The family settled in Kentucky, Khaled says, because "Gadhafi's assassins would never look for members of the opposition in Lexington."

"Every day, for the first five years I can remember, we lived with the paranoia that Gadhafi's thugs would come to the door like they did to political opponents living in Europe," he says.

After college at the University of Kentucky, Khaled moved to Chicago to pursue his rap career. "Can't Take Our Freedom" is his only overtly political song -- and his biggest hit. In the first week, the video for the song got more than 50,000 plays on YouTube.

"It is a tremendous feeling knowing people in Libya are hearing that message," he says. "And not just there, but Indonesia and Argentina. There are a lot of people around the world who want to see a free Libya."

It is quite a transition for Ahmed, who began rapping about girls back in sixth grade.

"It was never my intention to be a political rapper, or write political songs," he says. But, he adds, he felt compelled to record the song as the protests in Libya turned into a civil war.

"I felt like I had to stand up with them, in the way I know how."

As the sun goes down and the wind picks up, we start winding down our interview. Ahmed, dressed in a black pea coat, flat cap and square-rimmed glasses, is looking down at his phone, trying to pick up more news about the fighting in Libya.

Just then, two young women carrying shopping bags approach. Khaled is oblivious to them as he scrolls through his phone. They stand in front of him for a moment before asking if they can take his picture.

"Absolutely," he says. He stands up, and the woman with a free hand whips out her phone and snaps a quick shot. As they begin to leave, Ahmed shakes her hand, while his manager, who is on hand for the interview, quickly hands her fliers for an upcoming show.

Ahmed's manager Darrin Rich tells me that during that time, people have begun noticing the rapper with the trademark flat hat on the street. In the past month, he has been featured in more than a dozen national and local news profiles.

As the two women leave, Ahmed seems unfazed. He plops back down on the stoop. "I'm not going to tell you it's not nice being noticed," he says as he leans back against a concrete wall. "But I think success comes for me personally only if I stay humble, if I stay happy, if I stay on a straight path."

He looks straight down while he talks -- his eyes glued to the phone, searching for more news from Libya.