The original 'Idol' kicks off in Europe 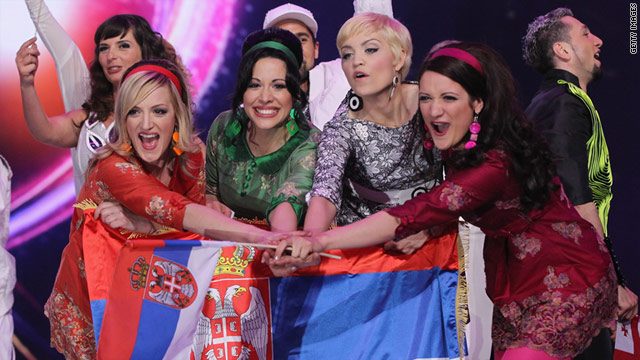 Nina of Serbia, second from right, celebrates after advancing to the next round at Eurovision.
STORY HIGHLIGHTS
RELATED TOPICS

Dusseldorf, Germany -- While America gets ready for the finale of "American Idol" and tunes into hot new shows such as NBC's "The Voice," Europe is busy watching the continent's annual vocal competition that many say gave rise to the entire phenomena of televised singing throw-downs: Eurovision.

Since 1956, European nations have sent representative artists and songs to battle for the boasting rights as top songsmiths.

On Tuesday evening the first semi-final of 2011 took place in a Dusseldorf, Germany, arena. And just like on U.S. shows such as "Idol," losers went home and winners advanced. The only difference is that in this competition, entire countries are left saddened when songs fail to impress the voting public in Europe -- and members of a jury: The vote is split 50/50 between fans and a panel of experts.

The winners advance to Saturday's final, where they will join the top contenders from Thursday's semi-final in an anticipated live broadcast of 25 artists from 25 countries singing their country's representative tunes in a winner-takes-all evening that is among Europe's most watched events of the year. Between 100 million and 120 million are expected to tune in this year for all three events.

Germany -- last year's winner -- the United Kingdom, France, Italy and Spain all automatically qualify for Saturday's final as members of the "Big Five."

Americans largely ignore Eurovision, as they have little reason to pay attention: U.S. broadcasters do not show the telecast and America has no official entry.

But this year, some in the United States are taking more interest than ever, thanks to a fresh crop of singers and increased exposure of the Eurovision brand brought about via Facebook, YouTube and Twitter.

To be sure, the European Broadcasting Union has a long way to go to gain fans in North America.

For starters, they have no official media partner to show the semi-finals this week or the finals on Saturday. Fewer than 20 U.S. journalists were accredited out of over 2000 total print, television, radio and Web journalists at Eurovision in 2011. France, by comparison, has around 125 journalists, many representing major news outlets.

Still, interest in Eurovision is up in the U.S. The number of American media outlets attending Eurovision this year has more than doubled from 2010 and Eurovision officials say website traffic from North America overall is comparable to last year and even up slightly.

Many view the competition as a curiosity. This year's crop at Eurovision has already produced two giggle-inducing entrants: Israel's official song in contention this year is simply titled "Ding Dong" while Belarus went with the not-exactly-subtly titled "I Love Belarus."

But the level of songwriting across the board seems to be on the rise at Eurovision. After all, this is where ABBA first made their mark on the world stage and every year great songs rise above the din at the event, with several this year piquing interest -- many are raving about a song from Azerbaijan.

This year's hopefuls might surprise curious American pop fans. Blue's "I Can," from the U.K. and Eric Saade's "Popular" from Sweden, rival anything on U.S. Top 40 radio at the moment, with slick production and memorable hooks.

It remains to be seen just who will get the final nod Saturday. Odds makers have France and the United Kingdom atop many lists at the moment, but that could change.

Whatever transpires at Eurovision this week, one thing is certain: It won't be dull.