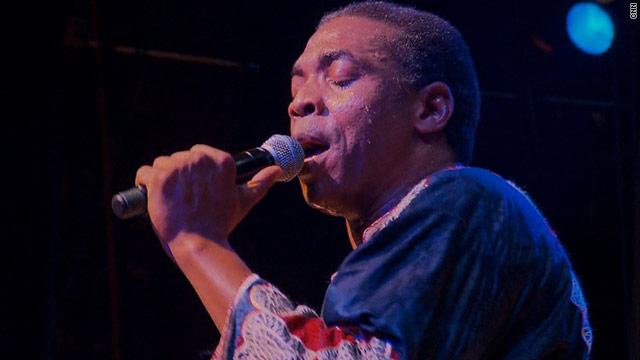 (CNN) -- The name Kuti belongs to a musical dynasty. But Femi Kuti is by no means living in his father's shadow and is much more than just the son of Afrobeat legend Fela Kuti.

For 26 years, Femi has been making his own music. He has crossed over to a global audience, recording with the likes of Mos Def and Macy Gray, and even providing a cameo voice over in video game Grand Theft Auto IV.

But his career has not been about ignoring his past, but building on his father's legacy.

"I just wanted my own music so I was not really running away from that fact or trying to find my own identity as such," Kuti said. "I just wanted to play good music and be happy playing good music."

His father, Nigerian multi-instrumentalist Fela, was an international superstar and is credited with inventing the Afrobeat genre.

However, it wasn't just his music that made Fela famous but his views as well. He preached for democracy over dictatorship and his music gave a voice to millions in Nigeria who were powerless in politics.

"He was truthful, he stood his ground, he never compromised, even at the risk of his life, and I think that's really what people admire," Kuti explained. "He never for one second thought of compromising or selling out his ideas.

"I saw him many times stand in front of the soldiers and say 'shoot me, kill me' and we all feared for his life many times, and I thought 'wow, will I ever be this brave in my life?' So I admired him," he continued.

But Fela's son has become a star in his own right. At 48, Femi has already spent a lifetime in music and grew up playing in his father's band.

In 1985 he assembled his own band called "The Positive Force" and through it he discovered his own style and his own voice. But he says watching his father stand up for himself gave him the strength to never compromise.

"I've witnessed a lot in my life, in his life, and I think all this is part of what gives me the courage myself to stand firm," he said.

Like his father's, Femi's voice is political, his cause is human rights. He says that a political message in his music is more important than singing about love.

"I couldn't see myself possibly doing anything else -- when I see poverty so blatant in front of me I don't see myself, I don't see the love story that could overwhelm my mind than singing about deprived people or children for instance," he said.

"I see that in a country so rich as Nigeria people can't afford a good education, we still have no electricity, the politicians keep giving us all their excuses," he added. "We're 12 years now in a new democratic era and we're still fighting the same story that my father fought when I was 15."

In his latest work Femi has not turned his back on his father's Afrobeat style; he's redefined, it adding worldwide influence into the music.

He recorded new album "Africa for Africa" in the same studio where he produced his first recordings with his father. The comparisons with Fela remain and the message is the same as it's always been.

I want them to think about what I'm saying -- the importance of Africa, the future of Africa.
--Femi Kuti
RELATED TOPICS

The recording itself has no superfluous production on it; Femi says he wanted this one to sound raw by making this the least produced album he's ever made.

"We thought nobody will like the album and then immediately from Europe everyone was like 'oh this is real raw, oh we love it,'" he said.

"We all got excited so that gave me the extra energy to want to play it on stage and continue -- I think there is nothing more terrible than you walk out and nobody likes it. You are so depressed -- it's like being sick and you cannot find what is wrong with you" he continued.

But his live shows are always acclaimed. On stage, it's easy to see Femi Kuti's connection to his craft. But after so many years of performing, he says it's the chance to make people smile, feel happy and be inspired that still drives him today.

"You might play to 5,000 people and one person might come up and tell you 'wow, thank you for a wonderful night,' and you go to bed and it rings in your head," he explained.