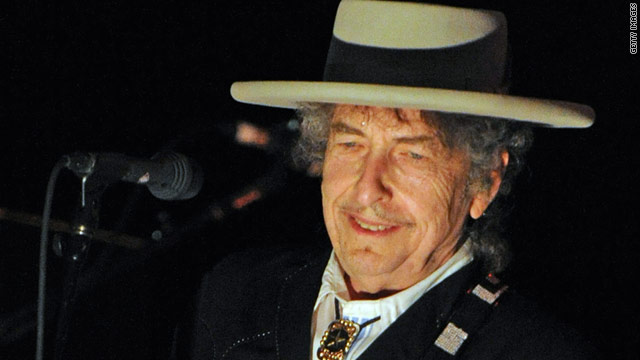 "Like a Rolling Stone" cracks open songwriting for a generation and leaves the listener on the canvas.
STORY HIGHLIGHTS
RELATED TOPICS

That sneer -- it's something to behold. Elvis had a sneer, of course. And the Rolling Stones had a sneer that, if you note the title of the song, Bob wasn't unaware of. But Bob Dylan's sneer on "Like a Rolling Stone" turns the wine to vinegar.

It's a black eye of a pop song. The verbal pugilism on display here cracks open songwriting for a generation and leaves the listener on the canvas. "Like a Rolling Stone" is the birth of an iconoclast that will give the rock era its greatest voice and vandal. This is Bob Dylan as the Jeremiah of the heart, torching romantic verse and "the girl" with a firestorm of unforgiving words. Having railed against the hypocrisies of the body politic, he now starts to pick on enemies that are a little more familiar: the scene, high society, the "pretty people" who think they've "got it made." He hasn't made it to his own hypocrisies -- that would come later. But the "us" and "them" are not so clearly defined as earlier albums. Here he bares his teeth at the hipsters, the vanity of that time, the idea that you had a better value system if you were wearing the right pair of boots.

For some, the Sixties was a revolution. But there were others who were erecting a guillotine in Greenwich Village not for their political enemies, but rather for the squares. Bob was already turning on that idea, even as he best embodied it, with the corkscrew hair Jimi Hendrix would later admit to imitating. The tumble of words, images, ire and spleen on "Rolling Stone" shape-shifts easily into music forms 10 or 20 years away, like punk, grunge or hip-hop. Looking at the character in the lyric, you ask the question "How quickly could she have plunged from high society to 'scrounging' for her 'next meal'?" Perhaps it is a glance into the future; perhaps it's just fiction, a screenplay distilled into one song.

It must have been hard to be or be around Dylan then; that unblinking eye was turning on everybody and everything. But for all the tirading, the real mischief is in its ear-biting humor. "If you ain't got nothing, you got nothing to lose" is the T-shirt. But the line that I like the best is "You never turned around to see the frowns on the jugglers and the clowns/When they all did tricks for you/You never understood that it ain't no good/You shouldn't let other people get your kicks for you."

The playing on this track -- by the likes of guitarist Mike Bloomfield and keyboardist Al Kooper -- is so alive and immediate that it's like you're getting to see the paint splash the canvas. As is often the case with Bob in the studio, the musicians don't fully know the song. It's like the first touch. They're getting to know it, and you can feel their joy of discovery as they're experiencing it.

When the desire to communicate is met with an equal and opposite urge not to compromise in order to communicate -- those two things are in perfect balance -- is when everything happens with rock & roll. And that's what Dylan achieved in "Rolling Stone." I don't know or particularly care who this song is about -- though I've met a few people who have claimed it was about them (some who weren't even born in 1965). The real thrill for me was that "once upon a time" in the world, a song this radical was a hit on the radio. The world was changed by a cranky voice, a romantic spirit, somebody who cared enough about an unrequited love to write such a devastatingly caustic put-down.

I love to hear a song that changes everything. That's the reason I'm in a band: David Bowie's "Heroes," Arcade Fire's "Rebellion (Lies)," Joy Division's "Love Will Tear Us Apart," Marvin Gaye's "Sexual Healing," Nirvana's "Smells Like Teen Spirit," Public Enemy's "Fight the Power." But at the top of this dysfunctional family tree sits the king of spitting fire himself, the juggler of beauty and truth, our own Willy Shakespeare in a polka-dot shirt. It's why every songwriter after him carries his baggage and why this lowly Irish bard would proudly carry his luggage. Any day.

"Mr. Tambourine Man" (Bringing It All Back Home, 1965) By David Crosby

As far as I can tell, the Byrds' recording of "Mr. Tambourine Man" was the first time anyone put really good poetry on the radio. The Beatles hadn't gotten to "Eleanor Rigby" or "A Day in the Life" -- they were still writing "Ooh, baby." But Bob's lyrics were exquisite. "To dance beneath the diamond sky with one hand waving free" -- that was the line that got me. At the time of "Mr. Tambourine Man," I think he was finding himself as a poet. He was learning to be beautiful.

I had seen Bob back at Gerde's Folk City in New York years earlier. Everyone was talking about him. I saw him play and thought, "(Expletive), I can sing better than that. Why are they making all that fuss about him?" Then I started really listening. And I almost quit, right there. Truthfully, I think the Byrds were Bob's best translators. Bob did not envision this song the way we did it. When he came to the studio where we were rehearsing and heard us do "Mr. Tambourine Man," he was stoked. I think hearing our version was part of what made Dylan shift over to being a rocker. He thought, "Wait a minute, that's my song," and he heard how it could be different.