How Apple's iCloud could help save the music industry 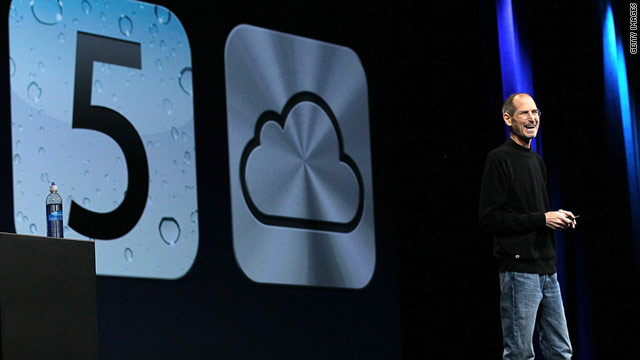 (Rolling Stone) -- Apple chief executive Steve Jobs' announcement today at the Worldwide Developers Conference that Apple's new iCloud service will allow music fans to reproduce their entire digital collections on locker-style servers accessible via 10 devices -- including iPhones, iPads and computers -- may not save the ravaged record industry, but it could provide a crucial new revenue stream while allowing consumers to easily consolidate their music libraries in the cloud.

"Keeping these devices in sync is driving us crazy," Jobs said in his keynote speech today at the WWDC in San Francisco today. "We have a great solution for this problem. We are going to demote the PC to just be a device. We are going to move the digital hub, the center of your digital life, into the cloud."

Rumored for weeks, iCloud will be free for up to 5 gigabytes of music downloaded via iTunes, Jobs announced. The service will scan and match users' current music collections for music carried by the iTunes store, and then make it available to all of the users' devices by sending the songs' metadata to the cloud.

The new iTunes iMatch service will cost $25 a year, with unlimited storage, for users to copy digital music ripped from CDs or downloaded illegally. (The free version is available immediately, while iMatch will roll out in coming months, most likely with a new version of Apple's operating system in the fall.) The service will also allow storage of movies, photos and other data files, replacing Apple's MobileMe, in an attempt to shift consumers from physical hard-drive to Web-based storage.

"It is one way to make someone pay for music they've already bought. It's pretty ingenious," Syd Schwartz, a former EMI Music executive who is now a consultant to artist managers and record labels, tells Rolling Stone. "I'm sure someone in an executive office at a major label somewhere is going, 'At least that's one way we can monetize the stuff people stole from Napster over the years.' "

Apple isn't the first to provide such a service -- Amazon unveiled its Cloud Drive in late March, and Google jumped into the market with Music Beta a month ago. (Also, in the late 1990s, MP3.com created a very similar service, Beam-It, but since the company had no licenses with major labels, Universal Music successfully branded it illegal piracy and sued, putting the service out of business.) But, in a swipe at his competitors, Jobs declared Apple's iCloud to be significantly faster than Amazon and Google's services. "It certainly appears like it's going to be a better experience," Schwartz says. "The Amazon and Google services were an attempt to bring them to market quickly."

And more important, unlike competitors Google and Amazon, Apple has licensing deals with record labels to use their vast song catalogs by artists from the Beatles to Led Zeppelin to Lady Gaga in the new service. As the world's biggest music retailer, with longstanding label deals for iTunes, Apple had the clout to make these deals where Amazon, Google and Spotify could not. The deals allow Apple to scan a user's hard drive and make copies of the songs in the cloud, rather than forcing users into the cumbersome process of uploading their collections. "You don't have to store individual copies of every track. Which Amazon and Google do," says a source at a major label. "And they have to pay for storage costs. ... Scan-and-match is a big advantage of a licensed locker."

Apple entered the music business in 2002, when it made digital-music deals with major record labels still shell-shocked from Napster and online piracy. In so doing, the computer company almost singlehandedly transformed the record business' longstanding sales model from selling $15 to $18 CDs to far less profitable 99-cent digital tracks. Apple did not give music companies a cut of the iPod, iPhone or other devices, however, and record executives have loudly complained as Apple's shares have skyrocketed during the same period labels have laid off staff, cut artist rosters and in the case of once-powerful EMI, flirted with bankruptcy.

Britney Spears' Life in Photos: Her Rise, Fall and Comeback

Labels have struggled in the past several years to find new revenue streams, and numerous top executives point to music subscriptions as a powerful new business model based on monthly fees. However, existing subscription services such as Rhapsody and MOG have yet to gain a foothold in the U.S. music market, and American labels have yet to make deals with Spotify, the free service that has been popular in Europe the last three years. Also, in the past, Jobs has been critical of the subscription model, although he seemed to change his position in late 2009, when Apple bought the growing subscription company Lala.

For iCloud, Apple will give the four major labels almost 60 percent of future profits, as well as roughly 12 percent to music publishers, according to music-business sources. (One source at another major label says Apple will determine future percentages based on labels' sales -- and that labels will then give profit shares to their artists based on the artists' sales.)

Many in the music business predict Apple will use iCloud as a gateway to a broader subscription service, perhaps in the next few months, although Jobs did not address this point in his speech. "It's a good start," says another music-business source. "If everyone in America who consumed music paid $25 to put their music in a cloud and then [iCloud] turns into a subscription-based music service -- doesn't sound bad to me. Those economics would work well for everyone."