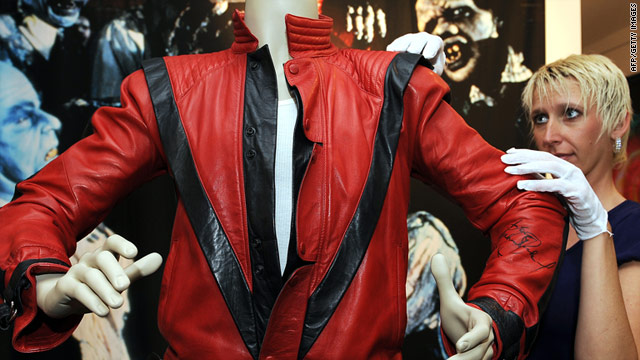 (CNN) -- In an auction featuring memorabilia from the Beatles, Madonna and Elvis Presley, it was Michael Jackson who proved to be king.

The red and black jacket, winged shoulders and all, that the late pop star wore during his zombie-ridden "Thriller" video fetched a $1.8 million bid at this weekend's Julien's auction in Beverly Hills, California, according to the auctioneer's website.

The winning price was exponentially above the estimated bid of $200,000 to $400,000. Part of the proceeds will go toward the Shambala Preserve where Jackson's two Bengal tigers, Thriller and Sabu, have been living the past five years.

The jacket had been given to Dennis Tompkins and Michael Bush, the singer's longtime costume designers, to use as a reference for concert performances of the "Thriller" song. It includes an inscription to them on the jacket's lining, and the sleeve is signed, "Love Michael Jackson."

Its sale came exactly two years after the then 50-year-old Jackson was killed by a surgical anesthetic called Propofol, which a Los Angeles coroner ruled killed the singer in combination with several sedatives found in his blood.

The jacket wasn't the only piece of history from the late King of Pop that was part of the auction. The signature fedora Jackson wore during his Bad Tour was sold for $16,250, a handwritten note to friend Elizabeth Taylor went for $5,625 and a signed pillowcase fetched $3,584. And a bidder paid out $330,000 -- more than 10 times what Julien's had expected to get -- for one of the famous, shiny, crystal-covered gloves that Jackson wore during the 1980s.

Other pieces of history, from other members of music royalty, were also featured at the auction. While gold records and instruments were common items, others were more practical -- like Frank Sinatra's boots (selling for $2,500) and his 1986 Jaguar car ($19,000). as well as the U.S. Army-issued sewing kit of Elvis Presley's that went for $1,536.

The King of Pop's closest competition at the auction was the Beatles, which had a number of items for sale. A signed postcard from Liverpool's finest sold for $5,504 and Paul McCartney's bass guitar fetched $14,080. But oft-diminished drummer Ringo may have gotten the last laugh, with the cape he wore in the movie "Help!" selling for $37,500 -- about five times the estimate.