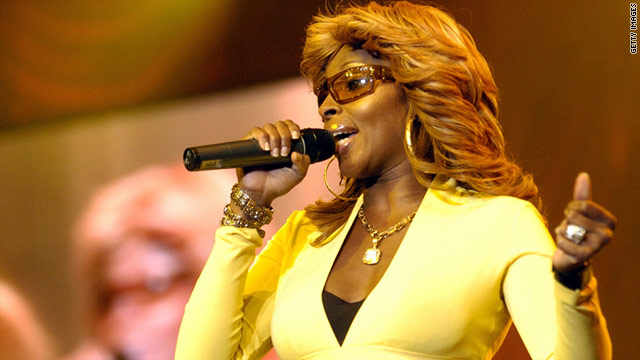 (Rolling Stone) -- After back-to-back stomach clutching renditions of "Not Gon' Cry" and "I'm Going Down" at the Essence Music Festival in New Orleans Sunday night, Mary J. Blige pulled off an Oprah-worthy seminar on affirmation with "Just Fine" to close out the three-day fest, which celebrates black music and African-American culture.

The synth-heavy number pierced to the core of the capacity Louisiana Superdome crowd. As Blige danced around in a shimmering black mini-dress, the audience took over the number and launched into a sing-along that reached up to the fifth level of the arena.

Earlier, Blige told Rolling Stone, "I don't think fans come here to hear you talk about your new album. They come to hold their stomachs when you sing that song that you love so much. That's what [the festival] is about. To get that nostalgia. You gotta give the people what they want." She certainly obliged.

If Blige's set was packaged as faith and forgiveness, then Saturday night's headliner, Kanye West, was essentially id decked out in a sporty white blazer. The Chicago MC arrived through the air via a cable-enabled lift before he got off and had a Rudyard Kipling-inspired moment and walked through the crowd to reach the stage for "Power."

Riffing off recent performances, West's show was a mix of his Coachella set (in three acts) and his VMA performance (red suit) but with a nod to the Essence crowd, as he finished with a stirring musical testimony to his mother, "Hey Mama."

"It feels so good to be back home," 'Ye told the audience -- not unlike Blige, preaching the power of healing. "When I say home, I mean my people. I travel the world. I been around the world. I got into a little trouble. A little controversy here and there. But before I go any further in the show, I wanna thank you for coming out and still supporting me."

Friday night headliner Usher and Charlie Wilson (Friday's penultimate performer) had an unofficial generational game of one-upmanship. Wilson commandeered the stage for what felt like an eternity, though in actuality it was much closer to two hours, still, surely more than his allotment. The former Gap Band singer ran through a series of his old cohort's hits, from "Outstanding" to "You Dropped a Bomb on Me."

Uncle Charlie, as he's been dubbed by Snoop Dogg, cut into Usher's constituency when he launched into "There Goes My Baby." The song not only shares the title with one of Usher's tracks, but the swooping song is best known (at least to the younger set) as Wilson's dedication to Snoop and his wife when the couple renewed their vows. Wilson smiled, preened and pranced as the audience swayed from side to side.

A rejuvenated Usher, however, proved it's still a younger man's game. He also arrived from the sky like West, but once he landed (equipped with a helmet), the pre-July 4th fireworks started. "U Don't Have to Call" and "You Make Me Wanna" thundered throughout the dome. Shrieks echoed as leather-clad Ush slithered between dancers during "Lil Freak" and "Trading Places."

But, much like Blige noted, the crowd wanted nostalgia and Usher offered it in heaps with a three-song Michael Jackson medley. It was a true "OMG" moment.