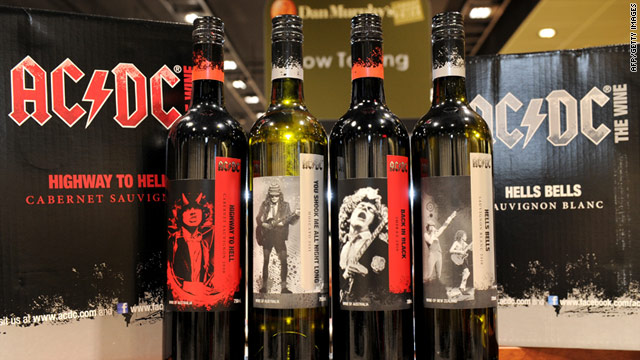 (CNN) -- Hells Bells! What are classic rockers AC/DC up to now?

The Australian headbangers are rolling out AC/DC The Wine this week in their native land.

Playing on the group's popular song titles, the band is releasing Back in Black Shiraz, Highway to Hell Cabernet Sauvignon, Hells Bells Sauvignon Blanc and You Shook Me All Night Long Moscato.

The heavy metal rockers teamed up with the Warburn Estate winery for the custom label line of vino.

"Styled for maximum enjoyment, whilst working your way through your catalogue of AC/DC albums," is how the band's PR team bills its latest release.

Fan reaction ranged from envy to amusement to horror.

"Fantastic -- any chance of getting the wines in Germany?" posted one fan on ACDCfans.net.

If the band picks up on the suggestion, it would likely be a full-bodied wine.

Another poster lamented: "how sad. good iconic band sells out to become wino's."

AC/DC formed in 1973, releasing its first album, "High Voltage," in 1975. It has sold more than 71 million units in the United States, according to the Recording Industry Association of America.

The band was inducted into the Rock and Roll Hall of Fame in 2003.