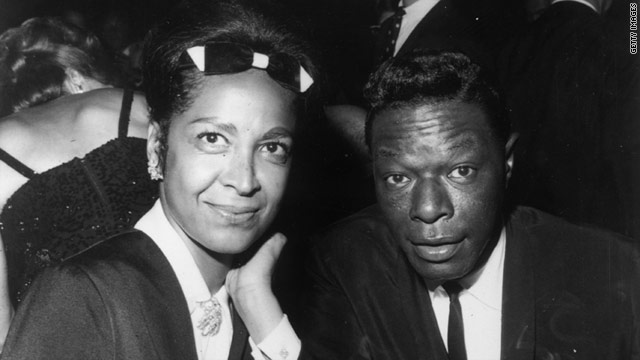 Los Angeles (CNN) -- Nat King Cole's groundbreaking television show, launched in 1957, folded after only a year because no national advertiser would risk a Southern boycott by sponsoring the first program hosted by an African-American.

"Madison Avenue is afraid of the dark," Cole said after quitting the show, making reference to the street in New York on which many advertising firms were located.

More than 50 years later, Cole's widow, Maria, reflected back on that comment.

"Isn't that a wonderful line?" Maria Cole said in a CNN interview Tuesday. "Madison Avenue was afraid of the dark in so many ways. The fact that he was black, the fact that they just don't seem to know what's going on."

What was too controversial for TV in the midst of the civil rights struggle is now available online for downloading this week, on the 46th anniversary of Cole's death.

The rarely-seen episodes, digitally re-mastered from the original kinescopes, can be purchased through iTunes or Nat King Cole's Vevo channel and YouTube. Four new shows will be released each month.

"I understand they came out wonderfully," Maria Cole said. "They were able to get them to look like they wanted them to, and I am so happy about that."

The January 28th show, filmed at New York's Paramount Theater, featured Count Basie and songs including "Lady Be Good" and "Namely You."

"The sound is just as fabulous today as 50 years ago," Maria Cole said.

Hosting the show was a challenge for Cole, who "was a little self conscious," she said.

"I could even tell it in the first two or three," she said. "He didn't like to ad lib a lot. He never was a real great ad libber, unless you were talking about music."

Her favorite episodes included Sammy Davis Jr., she said. "When Sammy apes him, you have to see that!"

Maria Cole is also partial to the shows with the Mills Brothers and Ella Fitzgerald, who she said was "the greatest singer, as far as I'm concerned."

The show drew a who's who of Hollywood stars -- entertainers who wanted to make the first national show with an African-American host a success.

"Every one of them came on there saying 'We'll do it, we'll show them,'" she said. "It was that feeling among all of them."

The failure to get a national sponsor left her husband "very disappointed."

After a year, Cole decided to quit, she said.

Her husband, though, "was not an activist," she explained.

"He didn't have an antagonistic bone in his body," she said. "He should have had a few, but my husband was not a fighter."

"I loved him dearly, but we were exact opposites," she said. "I admired him for his strength and his talent. He was very proud. He didn't say a lot. He was criticized by some of his own people because of it, you know."

The most publicized controversy for the Coles came soon after their marriage in 1948, when they bought a home in Hancock Park, then an exclusive all-white neighborhood next to Hollywood, California.

"There were no Jews or blacks there and they just almost had a stroke," she said. "And I didn't care if they did."

Despite efforts to force the Cole family to move, "We stayed there and we gave them tit for tat," she said.

While fans now have the television show to watch again, a movie about Nat King Cole's life may be coming, Maria Cole said.

"It will all be true, if I'm still alive," she said. "They don't need any dramatic license when they talk about Nat Cole. It all happened."

"There were refusals at hotels, there were places we'd go he wouldn't let me get out of the car because they would go in first to see if we could get the rooms," she said. "He didn't want me embarrassed with him."

But ultimately, Maria Cole wants fans to remember her husband for his talent.

"It was a very unusual talent," she said. "I remember reading where Sammy Davis Jr. said 'We ain't likely ever to see another one like him."