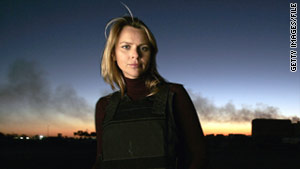 CBS News correspondent Lara Logan was covering the revolution in Egypt when she was attacked in Cairo.
STORY HIGHLIGHTS

(CNN) -- CBS News correspondent Lara Logan, who suffered an especially brutal sexual assault in Egypt's Tahrir Square while covering the country's revolution, said Sunday she feared a torturous death at the hands of the mob.

"I thought not only am I going to die here, but it's going to be just a torturous death that's going to go on forever and ever and ever," she said in a "60 Minutes" interview, her first on camera since the assault.

Logan was covering the celebration that erupted in Tahrir Square following the resignation of Egyptian President Hosni Mubarak on February 11. She reported for about an hour without any trouble.

The atmosphere in the square was festive, like a party, she said, until all of a sudden, it wasn't. An Arabic-speaking member of Logan's crew abruptly said she needed to leave.

"I was told later that they were saying, 'Let's take her pants off,'" said Logan, 40, about men in the crowd around her.

At first, Logan said she tried to yell, but that her screams "turned them into a frenzy."

"I didn't even know that they were beating me with flagpoles and sticks and things because I couldn't even feel that ... the sexual assault was all I could feel -- was their hands raping me over and over and over again."

Logan felt men pull her hair, trying to rip away her scalp and tear at her limbs, her muscles. Her clothes were shredded.

When she lost contact with the last remaining member of her crew, Logan -- speaking through tears -- said she had no doubt at that moment she was going to die.

But Logan, who has two young children, said she never stopped struggling.

"It's about staying alive now. I have to just surrender to the sexual assault. What more can they do now?" she asked. "The only thing to fight for, left to fight for, was my life."

The brutal attack went on for some 25 minutes, CBS reported.

At some point, she was dragged by the mob until it was stopped by a fence, near to where a group of Egyptian women was sitting.

She fell onto the lap of one woman, who put her arms around her, protecting her, Logan recalled. Other women closed rank.

Finally, some Egyptian soldiers fought their way through the crowd with batons, Logan said. One threw her over his back and took her to a tank. She was reunited with her crew and soldiers drove them back to their hotel, CBS said.

Logan later flew to the United States, where she went straight to a hospital. She is healing and said she feels strong.

Logan, who told The New York Times last week that she did not plan to give any other interviews after the "60 Minutes" segment was broadcast, said she is proud of having spoken out about her experience and breaking the silence around journalists and sexual violence.

"Women never complain about incidents of sexual violence because you don't want someone to say 'Well, women shouldn't be out there.' But I think there are a lot of women who experience these kind of things as journalists and they don't want it to stop them from doing their job because they do it for the same reasons as me," said Logan.

"They do it because they believe in being journalists."