Fans across the country gather for 'Oprah' viewing parties 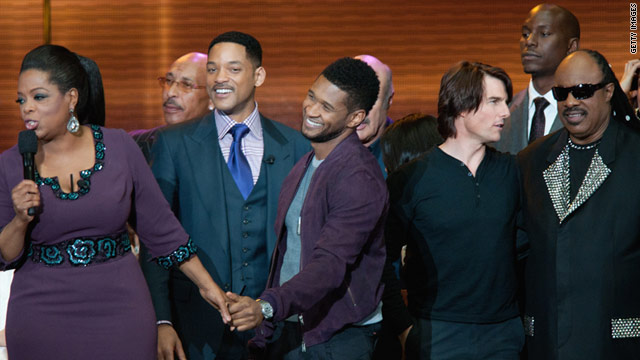 The lead up to the finale of "The Oprah Winfrey Show" included a two day, star-studded event.
STORY HIGHLIGHTS

(CNN) -- For millions of viewers, Oprah Winfrey has been like a friend who has come into their homes five days a week to share their lives.

So what better way to mark her last show Wednesday than to gather with good friends and watch the final episode?

"We all, in our own way, have been inspired by Oprah," said Shameeka Ayers, who planned a Southern hospitality viewing party at the Four Seasons Hotel in Atlanta, Georgia, in honor of the final show. "To me she epitomizes the notion that if you can dream it, you can be it. I know that sounds trite, but if you look at her life, you see how true it is," said Ayers who blogs as "The Broke Socialite."

The parties ranged from shindigs put on by local television and radio stations to intimate gatherings of friends.

The room at the Four Seasons Hotel was silent as Winfrey shared her "love letter" with her audience and shared the life lessons she wanted to impart.

There were tears as Oprah made her final walk backstage and high-fived her staff.

"It was everything that I hoped it would be," said Latoicha P. Givens, founder and partner of Phillips Givens LLC, after the show ended. "The final quote I take away is when Oprah said you are responsible for your own life, no matter your circumstances. That's so true."

"I loved it and I thought it was inspiring and motivating without at all being self-congratulatory," said writer Maria Smith who blogs at Mamaliciousmaria.

That ability to impart wisdom and draw people in is part of what has led to Winfrey's astronomical success, said Ron Simon, curator for television and radio at The Paley Center for Media in New York City.

The center planned its own viewing party complete with an open discussion session for fans who wanted to talk about the show. Simon said many fans have expressed a feeling of loss and viewing parties and discussions help to give closure to what has been a strong relationship between the star and her fans.

He said Winfrey has occupied rarefied air in the television industry.

"She is one of a handful of true broadcasters who reach so many different people of different races, nationalities and ages," Simon said. "There are only two people I can think of who had this iconic status and that would be Johnny Carson and Walter Cronkite."

Simon said Winfrey helped change the way daytime television is viewed. Looking back at an issue of TV Guide from September 1986 when she debuted, Simon said, her talk show was opposite "The 25,000 Pyramid" and "Family Ties" in his viewing market.

"Networks no longer run repeats of popular TV shows or game shows like that," he said. Winfrey "changed that whole landscape of what daytime television is. Now it's an exchange of information and empowerment where it was not like that before."

Winfrey spent two days leading up to her finale with surprise, blow out shows and some viewing parties aimed to capture a little bit of magic.

Stacey Ross runs SanDiegoBargainMama.com and helped organize a party in her neck of the woods complete with give-aways from local businesses, cocktails and local radio show hosts.

Ross said on Tuesday that a few hundred people were expected to attend at the Hyatt Regency in Mission Bay in San Diego. She received letters from people who wanted to be included on the guest list of the event -- as if it were as exclusive as the actual taping of Winfrey's final show.

"Oprah means so much because she inspires us to look beyond race, beyond gender, beyond age," Ross said. "To look at ourselves, reflect on our pasts and yet move forward on our new journeys. She wants us to live, learn and celebrate life so we are celebrating her."