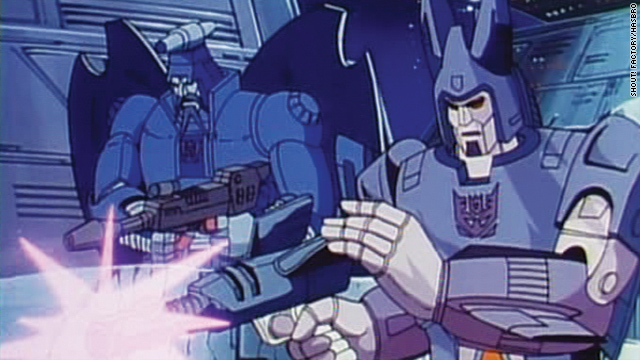 (CNN) -- In January 2010, a hardcore "Transformers" fan going by "gaastra" on a message board for Shout! Factory (a DVD and CD company "for the discerning pop culture geek") asked the simple question, "What would it take to get the Takara shows a release in America?"

Before long, Shout! Factory DVD producer Brian Ward was asking fans how much interest they would have in such a release and what they would like to see on it.

18 months later, the first of the "Takara shows," known as "Transformers: Headmasters," was officially released Tuesday for the first time in the United States.

Such is the relationship that geek-friendly companies like Shout! have with fans that this release has seen the light of day.

"I'm really excited about it," said Michael Albert of Bear, Delaware, moderator of Seibertron.com, a "Transformers" community site that boasts as many as 300,000 page views per day (mostly by fans whose interest in "Robots in Disguise" goes well beyond one of the biggest box office successes of the year, "Transformers: Dark of the Moon," and its predecessors). "This is the first time we've gotten a legitimate release of this Japanese series. You would have to get recordings of them burned onto DVDs, or import them from Australia or Europe, or find a laser-disc player from the 1980s to watch this."

Albert and others from Seibertron.com -- one of many fan sites like tfarchive.com, tformers.com and tfw2005.com -- said that these releases were one of the most sought-after items by fans over the years.

The Transformers first became a pop cultural phenomenon in the U.S. in the mid-'80s, based on a pair of toy lines from Japan's Takara company, Microman and Diaclone. When interest in the characters faded after a very short-lived fourth season of the original "G1" animated series, it came full circle with the Japanese producing "Headmasters," the first in a series of anime which took the characters in a wild new direction, involving new characters who were able to detach their heads, which were entirely separate characters (the U.S. series only touched on this concept briefly before it ended).

"It really is interesting to see just how the Japanese and their culture played into a series that for most of us we've only known as straightforward Autobots vs Decepticons," said Ward, a "Transformers" fan himself who has produced all of the Shout! Factory releases of other series, such as "G1" and the 1990s "Transformers: Beast Wars."

Ward pointed out other, more subtle culture differences. "Where the G1 characters would call Optimus Prime 'optimus' -- they were pretty casual with their leader -- the Japanese approach it very differently. Optimus Prime will be referred in more of a formal manner, he'll be 'Commander' or something among those lines."

"The Autobots and Decepticons [in these series] are, no pun intended a well ordered machine," he said. "It's interesting to watch those characters change culturally."

"Some major characters die early on," said Matt Brown of Canton, Michigan, a podcaster at Seibertron.com. "Later in the series, another major character bites the dust. They don't mess around."

As with any anime import, there is the eternal debate of "subbed versus dubbed." There are some fans who simply do not want to watch subtitles.

Kim Manning, head programmer for Adult Swim (which is owned by Time Warner, also owner of CNN), and one of the top people responsible for what anime series are seen in the United States, said that every effort is made to get dubbed versions.

"I think they're more likely to reach a more mainstream audience, and we're always hoping to get a larger audience excited about anime," she said. "I think hearing it in your native language allows you to get more absorbed in the action, and to pay more attention to the animation, which is often just gorgeous."

In the case of "Headmasters" however, the episodes are not dubbed, but have brand-new subtitles.

"We saw the releases that had come out in the U.K. and Australia and saw that the subtitles there weren't entirely accurate, and in some cases didn't make sense," said Ward. "It was clear that the folks who had translated did not use English as their first language. We gave it to a really good captioning and subtitling house in L.A. and they did a brilliant job of accurately translating the dialogue and understanding what was being said. We got those scripts approved by Hasbro (owners of 'Transformers'), and we're really happy with the outcome. The translation is about as close as one can get to an accurate translation of what's being said in Japanese."

Dubbed versions of the series are out there, however, including one for Malaysian and Singapore television. "When we heard them, it really got to a point where it was comical," Ward explaned. "The voices were awful. Names would change. Soundwave disappears and is simply replaced by 'New Soundwave.' It was almost the equivalent of watching a Saturday afternoon martial arts movie dub, and that's certainly not something we wanted to do with a property as beloved as 'Transformers,' so we opted out of original dubs and went for brand new subtitles."

Early fan reaction to this was not entirely positive. "There was a small bit of disappointment that the project couldn't secure enough funding to do a brand-new English dub," said Seibertron.com podcaster Bob King of Ashley, Pennsylvania. "I kind of share that feeling, but I also know that this isn't going to be a very mainstream release, and for them to spend that much money would be kind of a gamble. I appreciate that they're staying cautious."

"People who have not seen it before might be disappointed in the subtitles, but rest assured [that the existing dubs] are that horrible," said Seibertron.com founder Ryan Yzquierdo, from Chicago, Illinois. "You can't actually sit there and watch the dubs, unless you like drinking while watching 'Transformers.'"

Albert said that the Takara series' legacy extends beyond a mere curiosity: "The themes are non-Western compared to what Hasbro does now but some of the design aesthetics do play into what we see today."

The other Takara series will be released in the near future as "The Japanese Collection," though a production delay has postponed its release for several weeks.

Despite those delays and some early hesitation from the subtitle-phobic, Yzquierdo said that most fans are just excited to check the shows out: "This is something that I never thought I would see released in the States."

Indeed, this is just the latest example of fans communicating directly with companies to make a difference in what material is released to the public. Manning has communicated often with a "vibrant" community of fans on the Adult Swim message boards.

"We definitely look at what people are talking about online, what people are watching and buying online, too. From that, we're always looking for shows that we think will appeal to our audience, and then we pass it around the office -- several of us are anime fans, as well, so we make our own focus group."

As for the importance of the release of "Headmasters" specifically, Ward said, "It gives [fans] something definitive, something approved by Hasbro. Casual fans who just love Transformers will be really surprised by the quality of the show. These were things that were almost, for lack of a better word, lost to American audiences."