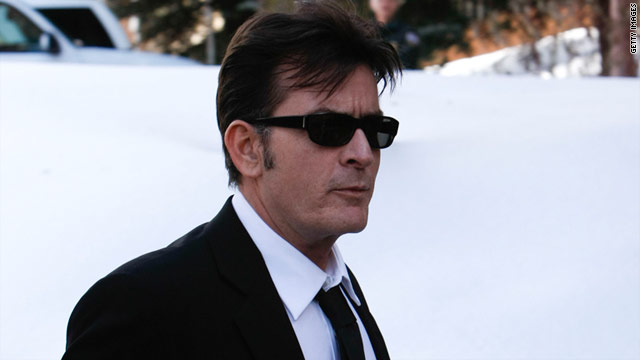 Charlie Sheen was "very, very intoxicated, also apparently in a lot of pain" last Thursday morning, according to a 911 call.
STORY HIGHLIGHTS

Los Angeles (CNN) -- Charlie Sheen was "very, very intoxicated, also apparently in a lot of pain" last Thursday morning, according to a 911 call from a doctor who had just talked to the actor.

"Kind of weird, the phone call I received," Dr. Paul Nassif told the Los Angeles Fire Department dispatcher in the recorded call, which was released by the fire department Wednesday.

Paramedics went to Sheen's Los Angeles home and then took him by ambulance to a hospital, where he spent several hours.

Behind the scenes of Sheen 911 call

Sheen's representative later blamed a hernia for Sheen's pain and ambulance ride to Cedars-Sinai Medical Center. He did not respond to a CNN request for comment on the 911 call Wednesday.

Sheen's manager has said the actor is undergoing rehab at home, not in a residential facility.

His hit CBS sitcom "Two and a Half Men" has suspended production, with the network ordering additional episodes of "Rules of Engagement" to fill the gap in their Monday night schedule.

"I have a lot of work to do to be able to return the support I have received from so many people," Sheen said in a statement

released Wednesday. It did not directly address the incident.

"Like Errol Flynn, who had to put down his sword on occasion, I just want to say, 'thank you,'" Sheen said.

Dr. Paul Nassif, in an interview Tuesday by HLN's "Showbiz Tonight," said he couldn't tell if Sheen, who is his friend, was drunk. What he told the emergency dispatcher last week was different.

"I got him on the phone and he was very, very intoxicated, also apparently in a lot of pain," Nassif said on the 911 call.

He told the dispatcher that Sheen was saying, "Don't call 911."

Nassif is a facial plastic surgeon and is not Sheen's medical doctor, Nassif told HLN.

"They wanted to get married, and a mutual friend introduced all of us, and they said, 'Let's get married, can we get married at your house?' and that's how we met and soon after that we became very good friends," Nassif said.

Nassif drove Sheen home from the hospital, but he declined to provide details of their conversation.

"There were things he said I don't feel comfortable" disclosing, Nassif said.

At another point in the interview, Nassif added: "Obviously we all want Charlie to keep his sobriety. No one can push him into it."