Judge rules trial of Michael Jackson's doctor can be televised 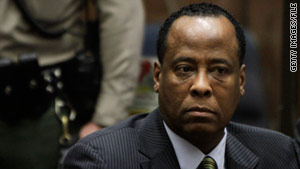 Pastor had set the trial to start March 28 when Murray invoked his right to a speedy trial during his arraignment last month. But the judge later decided it was cutting too close to the 60-day limit.

The opening statements are likely to be delivered during the first week of April. The trial is expected to last about six weeks, according to the defense and prosecution.

Murray, who remains free on $75,000 bail, was not in court for Monday's hearing. His lawyers said he was busy earning a living with his medical practice in Las Vegas and Houston.

Pastor blocked the doctor from using his California medical license until the trial is completed. The state medical board requested that be made a provision of his bail.

Murray entered a not guilty plea at his arraignment last month.

"Your honor, I am an innocent man," Murray said.

He was Jackson's personal doctor when the pop star died June 25, 2009, from what a coroner ruled was "acute propofol intoxication," in combination with "the contributory affects of the benzodiazepines."