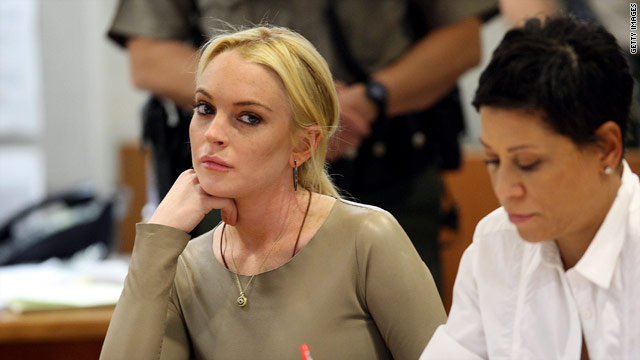 Check out CNN affiliate KTLA-TV in Los Angeles for updates on the hearing.

Los Angeles (CNN) -- Lindsay Lohan must decide by March 23 if she will accept a plea deal that would send her to jail or move closer to a trial in the necklace theft case, a judge told the actress Thursday.

Lohan would return to Los Angeles County Superior Court Judge Keith Schwartz's courtroom on March 25 if she is ready to plead guilty or no contest to the felony grand theft charge. Otherwise, a preliminary hearing will be held April 22 before another judge, Schwartz said.

Lohan's defense lawyer, Shawn Holley, must tell the court of her client's decision at least two days before the next hearing, he said.

Judge Stephanie Sautner, who would hear the case in the event of a trial, would also consider the matter of Lohan's probation violation at the April hearing, Schwartz said. The actress faces possible jail time for violating her probation for a drunk driving arrest because of the theft charge.

Schwartz told Lohan at a hearing last month that any plea deal would involve jail time.

"If you plead in front of me, you are going to jail, period!" he said during the February 23 hearing.

Holley previously said her client would welcome a plea deal, but only if it did not involve going to jail.

The actress is accused of walking out with a $2,500 necklace from Kamofie and Company, a jewelry store in Venice, California, on January 22.

The case against Lohan took another twist this week when the jewelry store sold the rights to the security video of Lohan -- which is key to the prosecution -- to the Associated Press for an undisclosed price.

"We hope that everyone understands that this is beyond our control, the flood of the requests to see this video were simply too overwhelming," a representative for the store said Tuesday. "It was truly necessary to put it out."

The store owners said Wednesday they will auction off the necklace and donate the proceeds to charity.

"Sofia Kaman would rather the money go to help an appropriate charity, since at least that way some good can result from this incident," the store said.

The auction will have to wait until the case is resolved, since the necklace is being held as evidence by prosecutors, the store said.

The felony grand theft charge triggered a charge that Lohan violated her probation for a 2007 drunk driving conviction.

The actress is free on bond on the probation violation and the grand theft charge while her lawyer and the prosecutor discuss a plea deal, or until a full hearing.

The penalty for a felony grand theft conviction ranges from 16 months to three years in a California state prison. The exact term would be based on the value of the property stolen and the criminal record of the defendant.

Shoplifting offenses are charged as petty theft if the property taken is valued at less than $950. The store owner claims the "one of a kind" necklace is worth $2,500, police said.