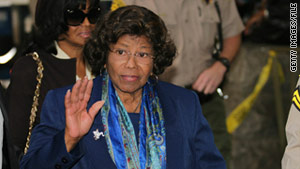 Katherine Jackson said she dreads sitting in court for Dr. Conrad Murray's trial, which is set to start May 9.
STORY HIGHLIGHTS
RELATED TOPICS

But Michael Jackson's mother, who turns 81 on May 4, said she does believe in the tradition of sending flowers to a loved one.

"It means love, 'I was thinking about you today, so I'm sending you these flowers,' " Jackson said. "Sometimes when you might be feeling down and you get some flowers, it perks you up."

Jackson, who rarely gives interviews, spoke to CNN about the Katherine Jackson Flower Collection, which launches Tuesday on SendHerFlowers.com, just in time for Mother's Day.

While Jackson was eager to talk about flowers -- her favorites are red and yellow roses -- she was reluctant to speak on the record about what has made her feel sad lately.

Perhaps she would have the strength later to talk about her differences with the men who now control her late son's estate or the upcoming trial of the doctor charged in his death, but not yet, Jackson said.

She dreads sitting in court for Dr. Conrad Murray's involuntary manslaughter trial, which is set to last two months starting May 9, she said.

But she will be there, listening to testimony about how her son died. The judge has already ruled that prosecutors can show photographs from his autopsy.

With the camera turned off, her frustration with the news media's coverage of the singer's life and death and of her family emerged.

For example, Katherine and Joe Jackson have sometimes been described as estranged. But after 61 years of marriage, they are still a couple in love, she said.

Her husband spends most of his time at the Las Vegas home given to them by daughter Janet Jackson, but it's not unusual for her to drive across the desert to spend a few days with her husband.

Joe Jackson often travels to Los Angeles to stay with his wife.

They sit together in court, sometimes holding hands.

She recently moved from the Encino mansion that was the Jackson family home for four decades and into a newly built mansion on a hilltop in Calabasas. Although the Hayvenhurst home is being remodeled, she hinted that she's not moving back.

With the camera turned back on, Jackson, who raised nine children and is now caring for Michael Jackson's three children, shared advice about motherhood.

She called it "the most important thing in the world."

"One thing about mothers -- they have to really be there for their children when they need her," she said. "They should be there at all times and know where your children are at all times. You must make your 'yes' mean 'yes' and let your 'no' mean 'no.' That's really the way to bring your children up."

It's the mother who holds the family together, she said.