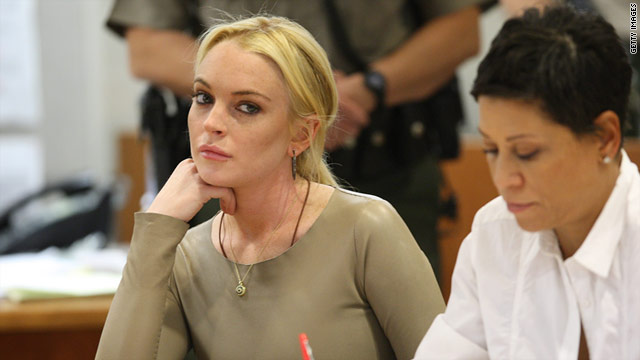 A source close to Lindsay Lohan says the actress plans to enter a 'no contest' plea this week to a misdemeanor theft charge.
STORY HIGHLIGHTS

Los Angeles (CNN) -- Lindsay Lohan has decided to enter a no contest plea this week -- the equivalent to a guilty plea -- to a misdemeanor theft charge, a source close to the actress said Monday.

While a judge has already sentenced Lohan to 120 days in jail for violating her drunk driving probation with the charge, she is likely to serve no more than two weeks, according to a Los Angeles sheriff's spokesman.

Probation officials, in a sentencing report that would be presented to the judge, could recommend that Lohan complete her sentence at home wearing an electronic monitoring bracelet, sheriff's spokesman Steve Whitmore said.

Lohan's trial for allegedly stealing a necklace from a Venice, California, jewelry store was scheduled for June 3, with a pre-trial hearing to be held Wednesday.

The source close to Lohan, who asked not to be named, said the actress would use this week's hearing to enter her plea.

Getting the threat of jail time behind her could be important for Lohan's acting career, considering she's been cast in the "Gotti" movie, which is set for production in October.

A new prosecutor took over the case last week, opening the door for new talks on a plea deal.

When Lohan rejected a plea deal last March and decided to take the theft charge to trial, it was a felony case. Los Angeles Deputy District Attorney Danette Meyers was insisting she go to jail at least for several months.

But Los Angeles Superior Court Judge Stephanie Sautner reduced it to a misdemeanor charge, which took it out of Meyers' jurisdiction. She handed the case off to the Los Angeles city attorney last Wednesday.

Sautner allowed Lohan to remain free on bond while she appealed the 120-day probation violation sentence.

The actress has already reported to the Los Angeles Downtown Women's Center where she must serve 360 hours of community service. Lohan must also work 120 hours at the county morgue, the judge ordered.

If Sautner gives Lohan no additional jail time on the misdemeanor theft charge, she could be free in just two weeks, based on guidelines explained by Whitmore.

The 120-day sentence is reduced to 71 days when the state formula for "good time" is applied off the top, Whitmore said. The remaining sentence becomes just 14 days served under the sheriff's guidelines to reduce jail overcrowding, he said. Female inmates locked up for non-violent offenses get out after serving just 20 percent of the sentence, he said.

Lohan's probation officer could recommend that she serve no jail time, but instead be fitted for an electronic ankle bracelet and ordered to stay at home for a time to be determined, Whitmore said.

But Sautner could have the final word, insisting on a minimum amount of jail time for Lohan, he said.

Lohan was just weeks away from being free from supervised probation stemming from two drunk driving convictions in 2007 when she was charged with felony grand theft. She allegedly walked out of the Venice jewelry store with a diamond-and-gold necklace around her neck that had not been purchased.

The alleged theft happened just three weeks after the actress completed three months of drug rehab. She checked into the Betty Ford Clinic only after another judge ordered her to jail for a month after finding she violated probation with a failed drug test.

At that time, prosecutor Meyers asked the judge to send the actress to jail for 180 days. "I'm not quite sure we've gotten her attention yet," Meyers said at an October hearing.

Meyers argued that Lohan has a pattern of checking into rehab "every time she has a violation and jail is leering over her head."

But Meyers is now out of Lohan's legal life.

Other than a few hours waiting in jail for bonds to be posted, Lohan has served just 13 days behind bars. That happened in August, when the sheriff let her out early from a 90-day probation-violation sentence.