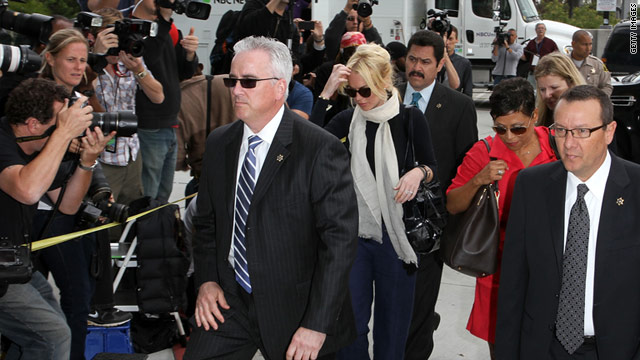 Lindsay Lohan arrives for a preliminary hearing on April 22, 2011 at the Airport Courthouse in Los Angeles.
STORY HIGHLIGHTS

Los Angeles (CNN) -- Lindsay Lohan must report to jail by June 17 to begin serving a 120-day sentence for a necklace theft charge, a judge ordered Wednesday.

After her sentencing, the court released a probation report that said the actress "appears to be continuing to struggle with substance abuse issues."

Lohan was not at the hearing, but her lawyer entered a no contest plea -- equivalent to a guilty plea -- to the misdemeanor theft charge on her behalf Wednesday morning.

"I am glad to be able to put this past me and move on with my life and my career," Lohan said in a written statement released Wednesday afternoon. "I support the judge's decision and hold myself accountable for being in this situation."

Early release formulas, required by a federal order to reduce jail overcrowding, will likely reduce the sentence to about 14 days in jail, Los Angeles County Sheriff spokesman Steve Whitmore said after the hearing.

"Because of budget constraints and because we're under a federal consent decree that requires us to curb our overcrowding situation, nonviolent offenders, lesser crimes, get 20% of their sentence," Whitmore said.

Los Angeles County Superior Court Judge Stephanie Sautner said the discounts on the sentences "seems to be like shopping at Costco."

Lohan likely qualifies to serve her sentence in home confinement, instead of a jail cell, but the probation officials will decide that, Whitmore said.

A report prepared by Lohan's probation officer and released Wednesday said, "It would appear that the defendant's criminal conduct is increasing in seriousness and severity," yet it suggested she serve her sentence on probation and not in jail.

Despite several months in court-ordered drug rehab last year, Lohan "appears to be continuing to struggle with substance abuse issues."

She tested positive for alcohol use, a violation of probation rules, in February, the report said.

But the judge rejected Deputy City Attorney Melanie Chavira's request for substance abuse counseling for Lohan. Sautner said drugs and alcohol are not the root of Lohan's legal troubles, but "she's got other problems for which she self-medicates."

Lohan's four years in and out of court -- and sometimes jail -- started with two drunken driving arrests in 2007. Since then, she's spent more than eight months in substance abuse rehab.

Lohan is already two days into completing her 480 hours of community service, including 360 hours at the Los Angeles Downtown Women's Center.

"I have already started my community service at the Downtown Women's Center and thank everyone there for their warm welcome," Lohan said. "I hope to be able to fulfill my obligation without any press attention. I think the media spotlight should be on issues such as homelessness and domestic violence instead of on me."

Sautner said she's asked Los Angeles police to keep the paparazzi away from the center while Lohan performs her service.