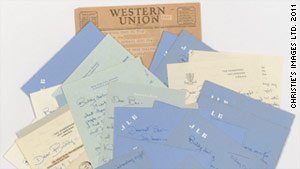 The 22 letters and a printed telegram written by Jacqueline Kennedy Onassis have been sold to a Frenchwoman.
STORY HIGHLIGHTS
RELATED TOPICS

(CNN) -- What price love -- or more accurately, what price a love letter?

When it comes to such letters written by a teenage Jacqueline Bouvier Kennedy Onassis, that price is $134,500, according to the auctioneer Christie's.

And if you like happy endings, it was "a French lady" -- perhaps appropriately enough -- who paid that amount Thursday and is now the owner of 22 letters and a printed telegram authored by Onassis, said Christie's spokeswoman Sung-Hee Park in New York City.

The letters, which Onassis sent to her then-boyfriend at Harvard in the late 1940s, were valued between $25,000 and $35,000 prior to the auction, held Thursday morning, Park said. The letters were written before Onassis met her future husband and future president John F. Kennedy, who also studied at Harvard.

"The buyer bought it over the phone, and they just wanted to be identified as a French lady who is a very big fan of Jackie Kennedy," Park told CNN. "It's always great when a piece of art goes for the estimate, but when something goes much higher than the estimate, it's a great surprise."

The letters reveal the personality of the future first lady on the matters of adolescent love, kissing and a loathing of attending a finishing school.

The auction house described the writings as "the earliest Jackie Kennedy letters," displaying "a funny, spirited, at times cynical young woman, but one with great intelligence and a strong will of her own."

In a letter dated October 10, 1946, the 17-year-old Miss Bouvier reveals her "cooling enthusiasm" in a letter to Harvard boyfriend R. Beverley Corbin Jr., "who seems to have been badly hurt when Jackie refused to kiss him during one visit," according to Christie's.

Corbin was 21 at the time. Corbin's son, Bev, of New York, owned the letters and put them up for auction, he told CNN.

"I do love you though -- and can love you without kissing you every time I see you and I hope you understand that," Onassis declares.

Then, on January 20, 1947, she writes to her boyfriend about her definition of true love.

"I've always thought of being in love as being willing to do anything for the other person -- starve to buy them bread and not mind living in Siberia with them -- and I've always thought that every minute away from them would be hell -- so looking at it that (way) I guess I'm not in love with you," Onassis writes.

Her last letter to him is undated, and it announces her engagement to John Husted.

"What I hope for you," she writes Corbin, "is for the same thing to happen as quickly and as surely as it did with me. It will when you least expect it."

But that ill-fated engagement to Husted lasted only a few months in 1951, according to Christie's.

Onassis died in 1994 in New York as one of the world's most famous women. She was 64. In an extraordinary life marked by staggering tragedy, she was the widowed first lady of Kennedy, assassinated in 1963, and became a widow again, of Greek shipping magnate Aristotle Onassis, who died in 1975.

Corbin died in 2004 at age 79, according to the Social Security death Index.

The 75 pages of letters were written between 1945 and 1951 on personal stationery and the letterhead of Miss Porter's School, but in the letters, Onassis calls Porter's finishing school "prison."

"If school days are the happiest of your life, I'm hanging myself with my skip-rope tonight," the teenage Onassis writes to her boyfriend.

In another letter, she pens of an upcoming Christmas break, when "I can commute happily back and forth between my doting parents until they both get sick of me."

"I'm never going to send my children to boarding school," she writes. "The boys can go to P.S. 148 with gangsters, and then go to Columbia & the girls can go to Hunter College and they'll all be morons but at least they wont have to tear around and get their teeth knocked out playing hockey every day. ... Can you think of anything worse than living in a small town like this all your life and competing to see which housewife could bake the best cake?"

The finishing school was in Farmington, Connecticut, a town where Corbin had resided at one time, a Christie's spokeswoman said.

Onassis displays a mischievous side in a February 12, 1947, letter in which she tells Corbin to smuggle in cigarettes, chocolate "and a hip flask to shock Mrs. J."

Many of the letters begin with "Dearest Bev" or "Buddy darling," and one envelope, sent via "air mail" with three 3-cent stamps, is addressed to "Mr. R. Beverley Corbin Jr." of "The Owl Club" at Harvard University.

The sale included an undated black-and-white photograph of Onassis and Corbin along with another couple.