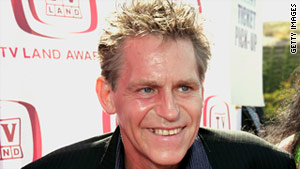 The same source, who asked not to be identified, described Conaway as being on the "razor's edge" in his fight for life Saturday.

Conaway, 60, who was in the TV series "Taxi" and the movie "Grease" more than three decades ago, was rushed to an Encino, California, hospital on May 11. He apparently had been unconscious for eight or nine hours before he was found, manager Phil Brock said.

Conaway's struggle with alcohol and drug addiction was chronicled in 2008 on the TV reality show "Celebrity Rehab With Dr. Drew."

Dr. Drew Pinsky, who treated Conaway on the show, posted Twitter messages after he visited him in the hospital Friday evening.

"He is stable & looks like he will recover from his pneumonia. Not an OD like press is alleging & certainly not dead," Pinsky tweeted.

But on Saturday, Pinsky tweeted a less hopeful message: "We all need to pray for him. Not doing well today suddenly."

Conaway's manager told CNN on Thursday that he believed it was a drug overdose, but the source with knowledge of his condition said the only illnesses were pneumonia and sepsis.

Doctors are using the surgical anesthetic propofol to keep Conaway sedated in a medically induced coma, according to Pinsky's tweets. "That also means he's intubated and on a vent," Pinsky tweeted.

The coma is needed to keep the patient from thrashing around, the source said.